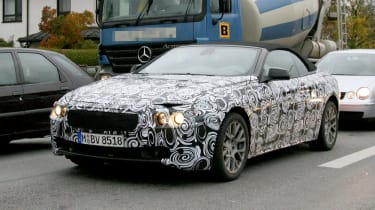 It comes in as a surprise and it may not look new at first glance, but these are the very first shots of the new BMW 6-series. The second surprise is that the convertible was snapped by our shooters before we got to see the coupé. And the third surprise is that the new 6-Series cabrio will come with a traditional canvas top rather than one of those retractable hard-tops that are so popular nowadays. This might have technical as well as design reasons: it’s difficult to find a solution for the stowage of a long roof without cutting too much off the luggage space. We do, by the way, assume the fake rear window is to hide the fins of the canvas-top first seen on the current model and apparently given to the new model again. Besides these fins, we can reveal the overall shape of the new 6-Series won’t differ much from the outgoing model, though refinement will be done to every panel. The new coupé and cabrio will be available again as 630, 650 and 635d models with outputs of 272, 367 and 286 hp.