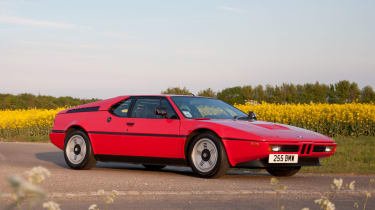 For a marque so synonymous with fast cars, BMW has been oddly reticent to enter the supercar market. With one wonderful exception…

It might be over 30 years old, but BMW’s so-far only mid-engined car isn’t embarrassed by more modern machinery, and neither is it the handful its advancing years might suggest. True, a peak output of 277bhp seems a bit sad next to, say, the E92 M3’s 414bhp, but then, being plastic-bodied, it weighs just 1300 kilos whereas the M3 registers a rather more bulky 1580kg. All right, the M3 would pull away on anything resembling a straight but, when it was new, the M1 could hit 60mph from rest in 5.8sec and power on to an unrestricted top speed of 161mph.

And as we found out when we got all the M cars together in 2007, the M1 could stay in touch with the swiftest of the new bunch without the need for Chuck Yeager levels of bravery or standby underwear. For an oldie, the M1 was remarkably easy to drive fast, reasonably civilised and amazingly user-friendly. It instantly felt special in the way only a genuine supercar can – hip-high roof, shallow nose, pop-up headlights, malevolently throaty exhaust note – and not because its acceleration was going to tear anyone’s head off, though it’s interesting to speculate just how close it might have come to achieving that in full, turbocharged race tune with 700bhp.

For raw, all-senses-engaged involvement, the M1 was something of a marvel, and if you did happen to find yourself with an armful of opposite lock half way round a glistening mountain hairpin, you wouldn’t get bitten. Scalpel-like precision can never have been part of the design brief, but once you’d taken up a little of the slack mentally and tuned into the sublime balance and poise of the chassis, a dynamic repertoire of rare brilliance was there for the taking.