BMW M1: history, reviews and specs of an icon

BMW M’s only mid-engined machine was designed first and foremost as a race car, but it was devastatingly effective on the road, too 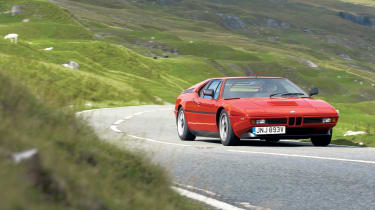 BMW must have been a wonderful place to work in the mid-1970s. The near bankruptcy the company faced at the end of the 1950s was long forgotten and its new 5-series and 3-series models were selling well on the back of abundant critical acclaim. The soon to be announced 6- and 7-series models would further enhance the marque’s model line up.

Then there was BMW’s recently formed Motorsport department headed up by Jochen Neerpasch that had seen the CSL ‘Batmobile’ coupes win titles around the globe and had an exciting road car program planned. But what Neerpasch really wanted was a full-on racer with which BMW Motorsport could take on arch-rival Porsche in Group 5 racing. Thus the M1 was born.

BMW didn’t have the production capacity to make the required number of cars in Munich in order to gain homologation so it commissioned Lamborghini to design the chassis and assemble the car. Neerpasch dictated that the car was to be mid-engined – a first for BMW – and its powerplant was to be a 3.5-litre straight-six.

As you can read in the history section below, Lamborghini let the side down as far as producing the cars was concerned and by the time BMW could make alternative arrangements, the requirements for Group 5 homologation had changed. The road car finally saw the light of day in early 1979 and was universally acclaimed as a remarkable achievement. It was BMW’s first, and until the arrival of the i8, its only mid-engined machine. It was also the first BMW road car to feature a four-valve-per-cylinder layout and this engine went on to power two generations of M5 as well as the M635CSi coupe.

Knowing that BMW Motorsport didn’t have the capacity to hand-build the 400 cars required for Group 5 homologation the then boss and driving force behind the M1, Jochen Neerpasch, commissioned Lamborghini to design and build the chassis and assemble the car. Lamborghini’s Gianpaolo Dallara might have done a superb job of designing the chassis, but it soon became clear that the company he worked for wasn’t going to be capable of producing the car in sufficient numbers. With rumours of impending financial collapse at Sant’Agata, BMW pulled the plug on Lamborghini’s involvement in the project.

Thus the M1’s production turned into one of the most complex of all time. The glassfibre body was designed by Giorgetto Giugiaro of Ital design, and was produced by Trasformazione Italiana Resina, based just outside Modena. The Lamborghini-designed space-frame chassis was produced by another Italian firm, Marchesi, also in Modena, while Ital Design in Turin bonded the elegant panels to the space-frame, fitted the glass, painted the complete body/chassis units and fitted the dash and some interior and electrical parts.

These part-completed M1s were then shipped to specialist manufacturer, Baur, in Germany for the installation of engines that were hand-built by BMW in Munich, transmissions from ZF, and all the remaining interior trim. The complete vehicles were then shipped to Munich so that BMW Motorsport could, in theory, give each car a final tune, wheel alignment check and road test before packing it off to the lucky customer. The reality was that a significant amount of work was required on the M1s once they rolled back into BMW’s Motorsport department as the build quality from Ital and Baur just wasn’t deemed acceptable.

The main upshot of this disastrous production process was that by the time production of the M1 got into its stride, the requirements for Group 5 homologation had changed and this left the M1 all dressed up with nowhere to go… which lead to the Procar series. This acted as support show to the F1 circus and pitched leading F1 drivers against endurance and touring car aces in 470bhp Group 4 M1s. Niki Lauda won the inaugural championship in 1979 with Nelson Piquet taking the title in 1980.

The M1 also took to the track at endurance races such as the 24 Hours of Le Mans where it was campaigned from 1980 until 1986 with various rates of success, but in truth it was outdated and even when packing a turbocharged version of its straight-six pushing out 850bhp in Group 5 guise it wasn’t wholly competitive.

The M1’s raison d’être was to go racing so BMW wasn’t too concerned that it was going to lack a 12-cylinder engined favoured by contemporary supercar rivals. Its 3453cc M88/1 straight-six was the work of BMW’s engine guru, Paul Rosche, who also oversaw the company’s F2 successes in the 1970s as well as being responsible for the E30 M3’s S14 four-pot, BMW’s turbocharged F1 unit and the McLaren F1’s S70/3 V12. All told, not a bad resumé. 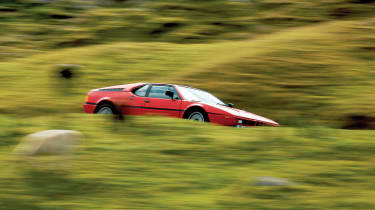 The M88 in the M1 used the block from the contemporary 635CSi with a four-valve head that was a development of the twin-cam that had been used in the 3.5-litre racing CSLs. It developed 273bhp at 6500rpm and 239lb ft of torque thanks to Kugelfischer-Bosch mechanical injection and Magneti-Marelli ignition.

Like all M engines it featured individual throttle butterflies and to help keep the height of the unit to a minimum and to ensure there was no oil starvation in racing conditions, it had dry-sump lubrication. BMW quoted a 0-62mph time of 5.6sec and a top speed of 161mph, making it BMW’s fastest-ever road car at the time.

Power was transmitted via a ZF five-speed manual and there was a 40 per cent locking limited slip differential, too. 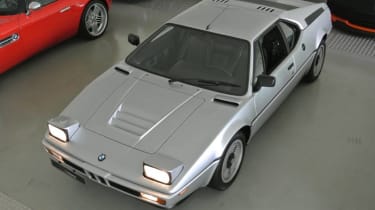 The steel space-frame chassis had been designed for way more power than the 273bhp straight-six could muster in road going trim and when combined with the unassisted rack and pinion steering, the unequal length double wishbones at each corner and height adjustable coil springs with bespoke Bilstein gas-filled dampers, the M1 was quite a handler. It shared the same geometry as the race car and just about the only compromise for the road was the inclusion of softer bushing to aid ride comfort.

Big (300mm front, 297mm rear) vented discs clamped by four pot calipers ensured it dealt with the task of washing off speed and contemporary tests reported excellent feel and retardation. The brakes were covered with a set of Campagnolo alloys (7x16-inches at the front and 8x16-inches at the rear) and these were shod with Pirelli P7 rubber – 205/55 VR15 up front and 225/50 VR15s at the rear.

If the exterior had the required supercar wedge-shape and the chassis, suspension and engine were pretty cutting edge, the M1’s interior could be seen as a bit of a let down - it was rather plain. The seats were a simple half leather/half cloth design, and there was a relatively basic dash layout and a smattering of switchgear from the BMW parts bin. 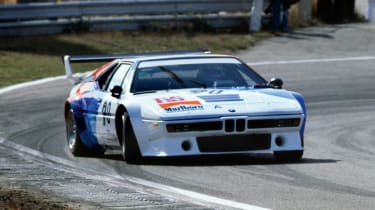 Drivers over six-feet tall will struggle to get comfortable as the bulkhead separating the cockpit from the engine bay prevents the seat going far enough backwards and the seats themselves lack a little bit in the way of lateral or lumbar support. The pedals are heavily off-set to the right in this LHD-only machine but you soon get used to it and by the standards of the day it was well equipped with a stereo, and such creature comforts as air conditioning and electric windows.

As a driver’s tool though it was superb, with the gear-lever falling a simple hand’s span away from the steering wheel and that flat faced BMW Motorsport wheel was tactile and perfectly positioned. Rear three-quarter visibility was a challenge though and the slatted rear screen didn’t help the view directly behind either.

For a car that was designed with competition in mind the M1 is remarkably tractable and pottering around town is perfectly possible – you could even take it to the supermarket as its boot could just about accommodate the weekly shop. Contents get hot though thanks to the exhaust running straight underneath the luggage compartment. 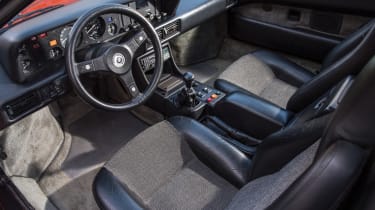 It’s out on the open road though that you really appreciate the M1’s talents. The engine is an absolute jewel, pulling hard from low down despite its high on-paper torque peak, but to really appreciate the M88 ’six you need to wring its neck, at which point you’ll be really travelling and revelling in the mechanical symphony coming from just behind your right ear. The first time I ever drove one through a tunnel I had to turn around and do it all over again just to experience the sheer drama and exuberance of that engine at full chat. Spine-tingling just doesn’t cover it.

The ride’s remarkably compliant, partly thanks to the suspension, and partly thanks to the generous tyre sidewalls and while the modest footprint won’t have it winning any grip competitions these days it still hangs on pretty tenaciously. Understeer is rarely encountered and when the rear end does threaten to step out, a modicum of opposite lock from the quick-witted steering brings it nicely back into line. Be smooth and deliberate with your inputs though and the M1 still has a delectably balanced feel to it and it’s still capable of cutting a dash cross country. A modern hot hatch would probably eat it for breakfast – that’s progress for you – but you can bet your bottom dollar you’ll be having more fun in the M1. 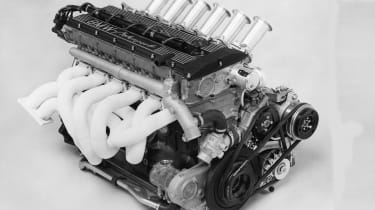 Porsche’s 911 Turbo might not have had the mid-engined layout but was almost as quick as the M1 and was £10,000 cheaper, while front engined rivals such as the £37,000 Aston Martin V8 Vantage and the £35,000 Maserati Khamsin were significantly more practical if not quite as finely honed driving machines as the M1.

Production numbers of the M1 are officially recognised by BMW as being 453 in total, with 399 road cars and 54 competition spec machines. Ten or 15 years ago you could have picked one up for less than £50k but these days BMW M’s only mid-engined machine will set you back upwards of £400,000.