Back for a third generation, BMW’s X5 M and X6 M are bigger, fatter and faster 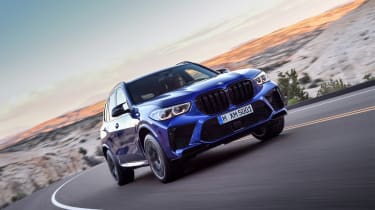 BMW has revealed details of its next-generation BMW X5 M and X6 M Competitions, typically the biggest of the M division SUVs. Both X5 and X6 versions will be launched together, and will be offered exclusively in Competition specification in the UK, arriving in April next year at £110,610 and £113,310 respectively.

Both share much of their technical make-up with the M5 Competition, featuring the same ‘S63’ 4.4-litre twin-turbocharged V8 petrol engine with peak figures of 616bhp at 6000rpm, and a table-top 553lb ft of torque between 1800 and 5600rpm. Based on the same hot-V turbo layout as in the M5 Competition, response should remain sharp thanks to the high gas flow rate, providing the turbochargers with a fast and smooth flow of exhaust gases to get the two turbochargers spinning much faster than a traditional twin-turbocharger layout. Lesser 592bhp non-Competition versions will be offered in other markets, but like the rest of the M range will not be available in the UK. Both Competition models will reach 62mph in 3.8sec, 124mph in 13.5sec and top out at 180mph if the M Driver’s Package is selected.

Also shared with the M5 Competition is the eight-speed ZF automatic transmission and all-wheel-drive layout, and although it doesn’t have the ability to decouple its front axle, a more rear-biased mode is still able to be selected within the variable M driver modes. Alongside the multi-clutch centre differential, M division has also fitted an active locking rear differential, which is able to apportion power to specific rear wheels as needs dictate. The transmission is also able to be independently varied as per M division tradition, with three gearbox modes selectable outside of the usual M1 and M2 modes via two red steering wheel-mounted buttons.

M division has also paid close attention to the engine’s cooling, designing a bespoke system capable of keeping the powertrain cool even on the racetrack, should you wish to take your 2.3-ton SUV on one. As well as an offside charge cooler, so too is there an onside oil cooler, and a supplementary electric water pump that activates once the ignition is switched off to keep the water circuit running after hard use. 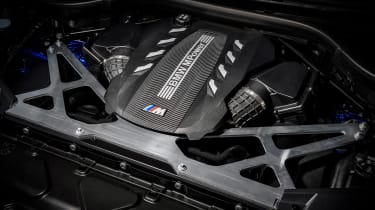 Overall body stiffness has also been improved, with stiffer mounting points for the suspension, a new underbody sheath and a huge aluminium brace mounted across a large portion of the engine bay all adding to torsional rigidity. The main purpose for the added stiffness was to give engineers a solid base for mounting the uprated suspension, which features new active dampers that constantly adapt to the road surface, and an active roll stabilisation system similar in principle to that seen on other big performance-oriented SUVs such as the Audi SQ7.

Twenty-one-inch wheels are standard, but will doubtless be replaced with the optional 22-inch units, which sit in front of 395mm steel brake discs gripped by six-piston calipers up front. No carbon-ceramic option is yet available, but the X5 and X6 do borrow the new M8 Competition’s integrated braking system, which combines a new electric brake actuator, brake booster and control functions into one unit. As well as more control over the braking actuation, it has also allowed engineers to develop two distinct brake pedal feel settings integrated into the wider M Driver mode functions.

Aesthetically, both the X5 and X6 Ms follow current M division styling conventions, with an open front bumper for cooling and the signature four round exhaust pipes. Unusually, despite their flagship statuses amongst their relevant ranges, the M division styling treatment has somewhat simplified the exterior styling, with a slightly cleaner look compared to their M Sport and M Performance range siblings. Both are still extremely extroverted in their appearances though, with the X6 in particular still shocking with its narrow rear lighting, large downturned grille and low, sloping roofline.

The interior also follows convention, with only a few M division-specific elements such as the M1 and M2 mode selectors on the steering wheel, the gear selector and seats differing from those of lesser models. Equivalent 63 AMG versions of the Mercedes GLE will be the pair’s closest rivals, as Porsche’s Cayenne Turbo lacks the outright firepower and the Turbo S E-Hybrid now has a slight weight issue keeping it from being the dynamic benchmark it once was. Land Rover, Maserati, Audi, Bentley and even Lamborghini offer rivals in this super-SUV class too, proving if little else that despite our historic musings against models such as the X5 and X6 M and their negative effects on the M division as a brand, it was probably the right commercial decision.