Rinspeed announces plans for a driverless BMW i3 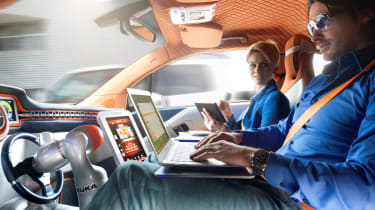 Swiss ‘idea factory’ Rinspeed has modified an electric BMW i3 to operate autonomously yet still, the claim goes, offer passengers the thrill of driving.

The theory behind the Budii concept, which will debut at the Geneva motor show, is deceptively simple. Operating driverlessly by default, when an occupant wants manual control – on a particularly appealing stretch of blacktop, for instance – a seven-axis robotic limb hands him or her the steering wheel.

Naturally the system is steer-by-wire, which limits its appeal for serious drivers. The Budii’s mission statement is more profound that satisfying the needs of lazy petrolheads, however, and the concept is tasked with fostering trust between man and machine as our personal transportation steadily becomes less driver-dependent.

“The autonomously driving car will require more than solving technical problems and legal issues in the next two decades,” says Rinspeed founder Frank Rinderknecht. “We not only have to redefine the interaction of man and machine, but must also raise question about responsibility tolerance and expectations.” 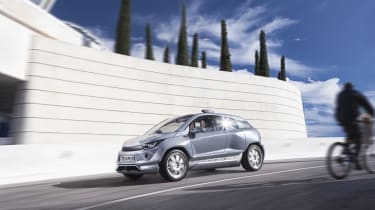 Rinderknecht has talked about developing a healthy, rather than a blind, trust in the capabilities of hardware and software. In support of this idea, the Budii boasts artificial intelligence and is programmed to recognise and learn from its surroundings.

“In the future, cars will do just as we do. They will keep learning every day, and as a result will get better and better at mastering the complex challenges of modern-day private transport,” says Rinderknecht.

In terms of design, the Budii is even more divisive than the car on which it’s based. In features adjustable ride-height (up to 100mm), 19-inch Borbet alloy wheels and, in true Rinspeed style, a laser scanner periscope that helps map upcoming terrain and appropriately adjusts the car’s ride-height. Two ‘mini vehicles’ are also stored in retractable doors on either side of the car.

Vehicle autonomy is a recurrent theme for Rinspeed, which previously made a name for itself building such cars as an amphibious Lotus and a shooting-brake-cum-pickup-truck based on the Porsche 996 Carrera. At last year’s Geneva motor show the firm debuted a driverless version of the Tesla Model S.