New BMW i8 Roadster revealed alongside updated i8 Coupe

Along with a folding fabric roof, the new BMW i8 Roadster also benefits from the same subtle mechanical upgrades as the Coupe. 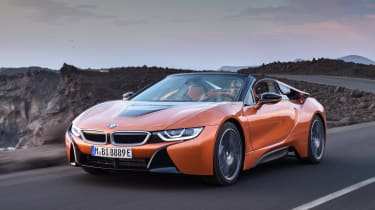 BMW has officially revealed a long-awaited soft-top variant of its i8 hybrid supercar, which joins an upgraded version of the standard Coupe. Both cars benefit from gentle visual and mechanical upgrades, including an improved plug-in drivetrain with a bigger EV range and higher system power outputs too.

We’ve already seen teased images of the Roadster, but this is the first time we’ve had any official details about the new package. For starters, the thanks to the i8’s light, strong and rigid carbonfibre tub construction the soft top i8 is only 60kg heavier than the Coupe at 1595kg. BMW has also been able to retain the Coupe’s distinctive dihedral doors for the Roadster, designing new frameless units made from carbonfibre and overlaid with an aluminium skin.

> Click here for our review of the current BMW i8 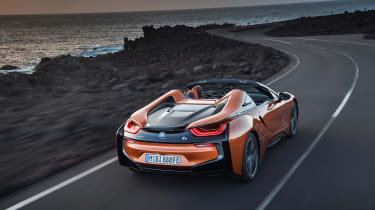 The Roadster’s folding roof is a compact fabric unit, slipping underneath a new interpretation of the i8 Coupe’s floating rear buttresses when stowed. Other aesthetic changes include two new colour options, laser headlights and redesigned 20-inch alloy wheels. Also included is new technology such as BMW’s controversial ‘display key’ as well as the latest iDrive infotainment system. All of these updates, apart from the fabric roof, will also feature on the Coupe

BMW has also upgraded the battery pack for both new models, raising capacity to 11.6kWh up from the previous i8’s 7.1kWh. Electric-only range is up nearly 50 per cent says BMW, with up to 34 miles achievable. Efficiency improvements in the batteries also liberate an extra 12bhp from the electric motor, which powers the front wheels.  All these tweaks result in a combined power output of 374bhp. However, the mid-mounted 1.5-litre turbocharged three-cylinder petrol engine is unchanged, save for a new particulate filter reducing NOx emissions in preparation of incoming real world economy testing. 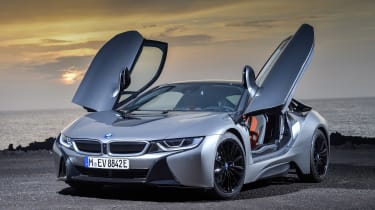 These powertrain improvements yield a 0-62mph time of 4.4 secs in the Coupe, with the slightly heavier Roadster taking a further 0.2 secs. Mpg has also been improved to 149.8mpg for the Coupe and 134.5mpg for the Roadster, although these numbers are always notoriously difficult to replicate in the real world, unless you charge frequently and mainly undertake short journeys.

Due to go on sale from January next year, the new i8 will be priced at £112,730 and £124,730 in Coupe and Roadster forms. We have been a little rough on the i8 for lacking the absolute focus of rivals like the Porsche 911, but will it make a little more sense without a roof? We’ll have to wait and see.