BMW i8 pumped to 409bhp by DTE Systems

Just as its production comes to a close, the hybrid BMW i8 has had its power lifted by DTE Systems. 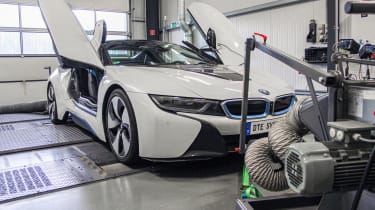 Production of BMW’s ecocentric i8 sports car comes to a close at the end of the month, but that hasn’t stopped Germany-based DTE Systems from giving it one last tweak. Though complex hybrid powertrains are renowned for being difficult to tune, more power is on the menu.

Under the i8’s thermoplastic skin is the same 1.5-litre three-cylinder unit you’ll find in a Mini, sending a surprisingly healthy 227bhp to the rear wheels - a single, front-mounted electric motor brings the total output to 369bhp and 420lb ft of torque. Though it was never high on the agenda for the i8, straight-line performance isn’t the standard car’s strong suit with the 0-62mph sprint coming in 4.4sec and a top speed of 155mph.

Enter, DTE Systems. Through the use of its advanced ‘PowerControl RX’ unit, the tuner has found an additional 40bhp and 49lb ft of torque, making for a total output of 409bhp and 469lb ft. Performance figures haven’t been disclosed, however its new-found power takes it above even the new 992 911 Carrera - which has 375bhp - and the Porsche manages a 0-62mph time of 4sec exactly. 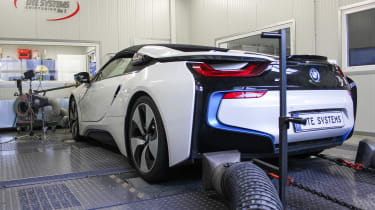 Not only do you receive more go with this tune, DTE Systems claims that you’ll also save money on fuel. Three modes allow the driver to choose between performance, efficiency, or ‘a blend of both’. ‘Sport’ mode offers full power and increased response over standard, whereas ‘Efficiency’ does just what you’d expect, providing up to a 15% reduction in fuel consumption - ‘Dynamic’ sits in between the two.

Just shy of €1000 (approx. £870) is the price you’ll pay for the upgrade. Though some felt that the i8 offered too little performance for its six-figure list price when new, apply this tune to one of the many sub-£40,000 used examples, and you have yourself a rather attractive 911-beater.