BMW has shown off another 'production ready' concept, with the M135i set to appear at the Geneva motor show 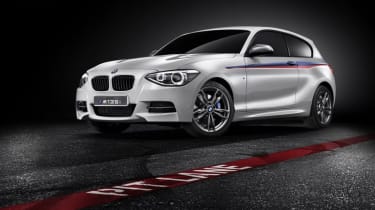 BMW is set to unveil another of its new wave of ‘M-Performance’ models – in concept form – at the Geneva motor show.

The M135i isn’t a direct replacement for the current 1-M Coupe, rather a new, sub-model that will sit at the top of the new 1-series hatchback line until the next 1M (or possibly even M1) comes out towards the second half of the models’ lifecycle. It gets a twin-turbocharged six-cylinder engine.

The show car is one of BMW’s production-close ‘preview’ models, but the finished version will likely offer the same visual bling – LED headlights, a chunky bodykit and a fatter rear bumper housing big caliber exhaust tailpipes.

Full mechanical details haven’t been released yet, but we can confidently predict that the engine will have more power than the existing 135i Coupe – which manages 304bhp – so reckon on around 320bhp, probably backed up by some mild weight-saving. That would give the M135i comparable power to the Audi RS3, although straight-line performance is likely to suffer due to the BMW’s relative shortage of driven wheels – we can still expect the production version to have a sub-5 second 0-62mph time, and performance curtailed by a 155mph limiter.

Although UK versions of the M135i will stick with rear-wheel drive, in Europe it’s likely it will be offered with a version of BMW’s xDrive four-wheel drive system. It’s also likely that the production model will be available with both a six-speed manual transmission and also BMW’s twin-clutch DCT system, which the company has recently (and quietly) introduced on the current 135i coupe.

As befits its position at the top of the 1-series hatchback range, we can expect pricing of UK versions to be north of £35K when they arrive here later this year. 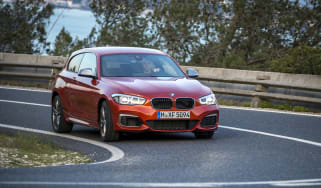