V8 for all-new M3 as BMW strips off disguise 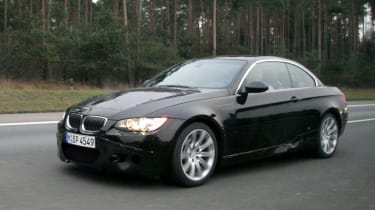 A new version of one of the world's best-selling high-performance car is preparing for action - and here are the first pictures that prove it will also be coming as a high-performance four-seater cabrio.

The all-new BMW M3 Coupé and Cabrio were spied with thin disguising, testing in Munich and on the German Autobahn. The next-generation M3 is the first V8-engined 3-Series, and offers 400-plus bhp - so expect it to race from 0-62 mph in a fraction over five seconds, and go on to a limited top speed of 155 mph.

Power will be fed to the rear wheels via a six speed manual gearbox or the latest SMG sequential manual, possibly with seven ratios. The new car should maintain the M3's reputation for outstanding handling. The V8 – derived from the M5’s V10 – will be more compact than the current in-line six cylinder model, while a longer wheel¬base will help with weight distribution.

Externally, the car takes many cues from the M5, with twin-exit exhausts, front wing vents and discreet 'M' badges, while the look of the all-new 3-Series means an aggressive nose and deeply sculpt¬ed flanks. Expect to see the M3 in showrooms in spring 2007 with the Cabrio likely to follow six months later.