The BMW M5 has managed an 8-hour, 232-mile drift. BMW also broke the tandem slide world record while it was at it. 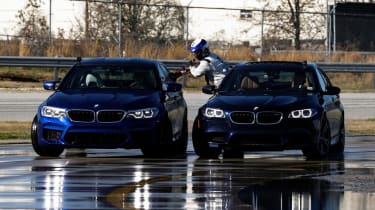 For all those who were just thinking that the Guinness World Record for the longest drift needed to be broken, BMW has just answered the call. The firm has performed the longest continual wet drift over the course of 232.5 miles in the new F90 BMW M5.

The stunt took a total of eight hours with BMW racing driver Johan Schwartz at the wheel, sliding the new 592bhp super saloon on a skidpan at an average speed of 29mph. In order to keep the drift going over such a long length of time, BMW needed to figure out a way of refuelling the M5 on the move and BMW precision driver Matt Mullins was employed to pilot a second (F10) M5 to act as a mid-drift re-fuelling rig.

> Click here for our review of the new BMW M5

The two M5s then completed a stunning tandem drift (itself a new world record for a tandem drift at 49.25 miles) while stuntman Matt Burns hung out the rear window refuelling the car through a bespoke racecar-style refuelling rig. A total of five refuelling sessions were required to keep the M5 going over the course of the record drift.

The M5's record drift sees it take over from one set in 2014 in a Toyota GT 86 at 89.55 miles, meaning BMW more than doubled the previous record. One may remember that the new BMW M5 is all-wheel drive, but one would safely assume the aptly-named drift mode would have been activated for the attempt.