The M6 has one of the greatest ever production engines wrapped in a timelessly handsome coupe body. What's not to like? 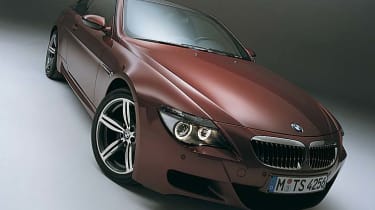 The 500bhp motorsport-inspired V10 that blessed the BMW M6 more than a decade ago was a true innovation for BMW at the time. Gas-guzzling, naturally aspirated and thoroughly intoxicating, it’s an old-school brute, though in todays modern world of downsizing and turbocharging, it’s almost unheard of. It just so happens that when fitted to the 6-series, it created a monster – the BMW M6. But first, the M5.

In 2004 the E60 generation M5 was born ahead of its time boasting a launch control system which could rocket the 1755kg luxury saloon from 0-62mph in a staggering 4.7sec, and – once the electronic limiter was removed – would rise to an almost unheard of 205mph.

A year later, the E63 M6 followed, which not much long after brought with it the E64 convertible. This new step up in generations resulted in the M6 borrowing the M5’s world-class drivetrain which held with it the V10 and SMG paddleshift transmission.  BMW then housed all that in the M6 body, which was now lower and lighter (by 120kg) and also much sleeker visually.  All these upgrades reduced the 0-62 time by 0.1 sec, and although the top speed stayed limited to 155mph the acceleration was blistering. Back then, it was the German brand’s fastest production car to date. 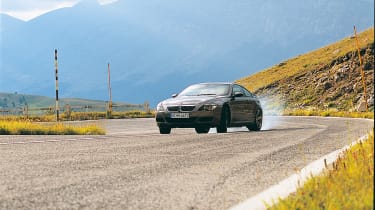 If you were to invest in one of the machines at the time you would be pleasantly treated to a long list of standard equipment, meaning there was no need for thousands to be spent on extra options. A seven speed sequential box, M-diff, plus three mode damping and changeable stability and traction control systems all lined the spec list, though could still be tailored to personal taste. It didn’t stop there though, as a state-of-the-art heads-up display featured in the car along with some tasteful 19in deep-dish alloy wheels encasing the vast ventilated discs. All of this brought the re-vamped M6 to a £79,760 list price, though as the last cars began to depart the showrooms back in early 2011 this price rose to a modest £87,335. Today on the other hand, be prepared to pick one up for less than £20k.

> Read our review of the latest BMW M6 coupe here

Despite the enticing second-hand list price, these cars don’t come cheaply on running costs (though to save two hundred quid a year in road tax, aim for a car registered before 23 March 2006). Rear tyres and brakes will quite rightly need replacing frequently, and that is rather expensive coupled with the MPG averaging a figure in the mid-teens at best. In addition to the usual costs, if anything goes pear shaped all of a sudden, the repair costs can be sky high - so the BMW-backed Mondial warranty scheme is advised. It is available for any car with full BMW history and that is sub-60k miles – keep that in mind when viewing high mileage cars. £100 a month will provide you with full cover that can most likely be tailored to specific components.

In essence, the iconic M6 V10 is a bitter sweet product that offers outstanding performance and harmonises a pure sound of beauty, though in its later years has developed some major problems. Munich Legends’ Stuart Draper informed us that even cars with around 70,000 to 80,000 miles on the clock will most likely end up with dropped valves or a valve spring failure which will result in the need for a rebuilt cylinder bank, putting you back £3k to £4k. In addition to this, the higher mileage cars tend to acquire Bottom-end failures which damage the cranks from picking up and spinning bearing shells. Just this could require a new engine.

Another point is that, if spark plugs haven’t been out for 40,000 miles, some coils are nearly one hundred percent going to destroy themselves and break, which can be very time consuming. Throttle bodies are also delicate. 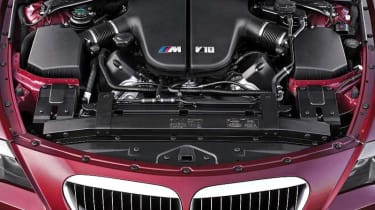 Overall, the engine is very temperamental on higher mileage cars, and even though the ones with these high miles - though a temptingly cheap price - may seem too good to be true, it’s generally because they are.  Once they become cheaper they tend to have changed hands multiple times, and so sometimes servicing isn’t as comprehensive as it should be. Also as they get through so much oil - a litre every thousand miles or so - this sometimes receives neglect.

Unlike the engine, the transmission tends to be fairly trouble-free, and once undergoing the big service you should have differential oil covered too. In addition to that, clutches last pretty well and usually stretch to 50,000 miles. Of course, when viewing cars around that mileage, watch out to make sure it’s been replaced - though it should be taken into account that frequent use of the launch control system must be done cautiously when considering the life cycle of the clutch. It won’t take long to damage it quickly. If you do decide to embark on a clutch replacement then it would probably be best to get the flywheel done at the same time. A replacement from BMW will cost up to £4k, though a job from an everyday mechanic would only set you back around £1500.

There isn’t too much to be wary about in this case - only minor parts wear out from long-term use. Firstly, the suspension can be very hard wearing and so you may hear creaks coming from the rear lower balljoint. Also, there is the possibility of acquiring a shimmy through the steering under harder braking due to warped disks, or worn brake reaction bushes. These need replacing every two or three years. Unsuprisingly, due to the car weighing a large amount, it can eat through brakes in no time and so to replace the fronts you will be put back over £1000. Finally, when driving spiritedly and frequently, the tyres will hold up at a safe level for around 10,000 miles, though when they do need replacing a decent pair of Pilot Super Sports on the rear will come in at around £450. 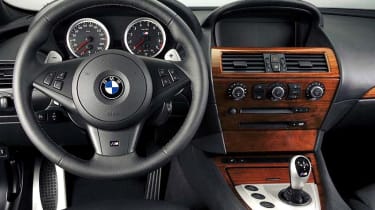 A common problem for older cars is water seeping through due to blocked roof drains, which can move into the control units. This then is something that should be checked when viewing cars so examine footwells, tyre wells and similar places for damp patches.