We drive the Coupe version of BMW's new M6; is the 'two-door M5' as thrilling as it is fast? 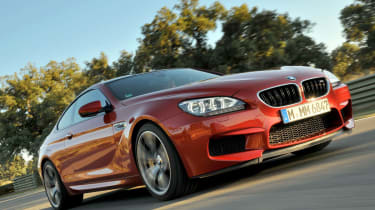 What is it?  The mk2 BMW M6 Coupe, perhaps a more obvious swoopy alternative to the F10 M5 than the M6 Convertible we drove in May. A carbonfibre reinforced plastic roof replaces the soft top, lowering the centre of gravity, improving rigidity, and shaving a few kilos from the not inconsiderable weight. Technical highlights?  Much as with the Convertible, it's the 552bhp 4.4-litre twin-turbo V8 that takes centre stage, pulling off the impressive trick, for a blown motor, of seamlessly melding masses of low and mid range urge (500lb ft of torque from just 1500rpm) with an equally fierce rush to the 7200rpm red line while managing to use 30 per cent less petrol than the V10 that powered the previous generation M6. The technical tour de force doesn't end there, of course. In addition to BMW throwing all it knows at the chassis, just about every significant driving parameter is configurable, with a mind boggling 486 possible combinations that will take you all the way from boulevard cruiser to track-ready hard nut. What's it like to drive?  A tiny bit quicker than the Convertible. The 0-62mph drops a tenth to 4.2sec and by 200 clicks (or 124mph), the gap has grown to half a second (12.6 plays 13.1sec). If such things bother M6 drivers, both economy and CO2 emissions are slightly better, too, the coupe posting a combined 28.5mpg and 232 g/km. So it’s seriously quick and not unreasonably thirsty, but if you want a tasty V8 soundtrack to accompany the monumental thrust, the bassy blare that, curiously, takes on a distinctly four-pot character as the revs rise, simply won’t cut it. Still, the chassis has the compass to deploy the performance with startling composure and authority, feeling perhaps subtly sharper than the Convertible and containing its mass superbly, even when a bunch of eager hacks declared war on the tyres during a day at the challenging Ascari circuit near Malaga in Spain. The optional carbon composite brakes simply shrug off punishment while the meatily weighted hydraulic steering offers fine accuracy and feel.

It all inspires huge confidence with the electronic traction and stability regimes in various states of play and great balance for a spot of indulgent smoky drifting with the M Diff and rear wheels given free rein. Trouble is, the M6 tends to hide its light at saner speeds on the road, feeling accomplished, friendly and effortlessly rapid but less engaging.

At nearly £94k, the M6 coupe is a fair chunk cheaper than the Convertible, but can still count Astons, Porsches and Maseratis among its rivals. If the goosebump factor figures in your purchasing considerations, the M6 coupe will have a tough time fending off the likes of Jaguar’s XKR-S and Merc’s CLS63 AMG, both of which exercise their wares with more (perhaps necessary) theatre. Pace isn’t the M6’s problem, it’s entertainment.   Anything else I should know?

BMW reckons it will sell 60 M6 coupes in the UK in the first full year of production and 40 soft tops. Unless the hair/wind/pose interface is a necessity, we’d go for the carbon-roofed coupe, pocket £5k and think what to do with all the extra boot space (a handy 460 litres compared to 300 for the drop-top with the hood down) on a long trip.