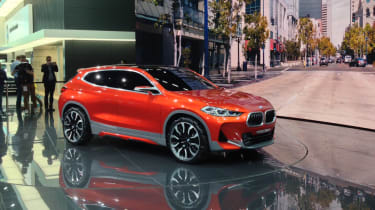 BMW will launch a new compact SUV in 2018, which will go by the name X2. Launched as the Concept X2 at the Paris motor show, the crossover has been created as a response to the huge success of BMW's other X-badged models across the world.

Similar in size to the X1 - and continuing BMW's even-numbered naming convention for coupe and convertible versions of its more conventional models - the X2 also highlights the next stage of BMW's design language, debuting new surfacing and detail treatment in the BMW range.

Most notably, as BMW's senior vice president of design Adrian van Hooydonk explained on the model's launch in Paris, is a new interpretation of the traditional BMW kidney grille that is wider at the bottom than it is at the top.

At the other end, the C-pillar slopes at a more significant angle than those of usual BMW X models, though the X2 lacks the fastback-style roofline of the larger X4 and X6 - which does give it a more natural look than those cars. The rear end looks similar to that of the current 1-series but is distinguished by a skidplate-style section at the bottom of the bumper. 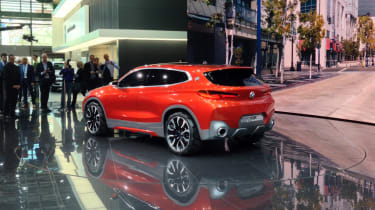 Lights at both ends use BMW's latest technology, with lasers up front and LEDs astern, and along the X2's flanks a slim glasshouse ringed with brushed aluminium trim (echoed on the grille and the door mirrors) sits above the curved metalwork of the doors. Wheels are 21-inch in diameter all round, and the concept's tyres are suitably chunky, implying off-road potential that may not surface in the production car.

At this stage no powertrain details have been revealed, though given the X2 sits on the X1's platform - also shared with the 2-series Gran Tourer and Active Tourer - expect a range of four-cylinder turbocharged powerplants and possibly even BMW's 1.5-litre turbocharged triple.

The production X2 is pencilled in for Spring 2018. You can catch up with other stories from the Paris motor show on our Paris hub page or for a different view on the X2, visit our sister site Carbuyer.