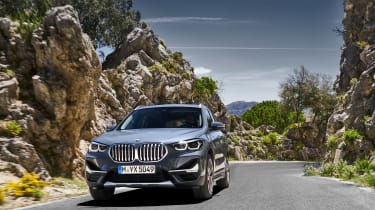 The entry-level BMW X1 SUV has been given a light refresh in the midst of a 2019 product offensive, sharpening the styling, powertrains and interior along similar lines to other new models in the range.

At first glance one might not notice the aesthetic changes, but sit it side by side with the previous version and you’ll spot plenty of subtle differences designed to sharpen up the overall design.

> Click here for more on the new BMW 1-series

The grille is now both bigger and slightly reshaped, joining in the middle above a more complex lower section. Also new are the new LED headlights, which complement new slim LED fog lights, replacing the previous round units. New rear lights complete the package, but overall the effect is subtle at most.

The interior is largely unchanged, save for the latest BMW infotainment system now accessible via both a touchscreen or traditional click-wheel controller. Some trim and material finishes have also been changed, but overall the basic layout is identical to before.

Four engines will be available in the UK at launch, split between two petrols and two diesels. Like the recently revealed BMW 1-series, front-drive is standard on most models, with all-wheel drive optional on higher-specification 20i petrol and entry 18d diesel models, and standard on the highest-powered 187bhp 20d.

The X1 is otherwise unchanged, and should share its inoffensive and mostly un-BMW-like driving experience with the model that came before. With SUV models now spread right the way between X1 and X7, BMW has plenty of options for those looking for such a car, of which this updated model slips neatly into.

However if you’re looking for a compact SUV at this price and size, there are plenty of rivals to also consider such as the Volvo XC40, new Audi Q3 and all-new Range Rover Evoque – all rivals that have proved strong competitors in this highly-strung segment. Whether this light upgrade will be enough to keep it competitive remains to be seen.