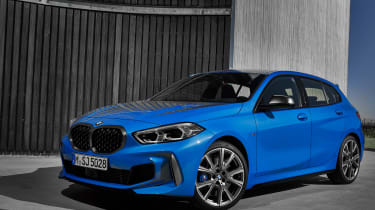 BMW has revealed the all-new 1-series hatchback, the third generation of its compact premium hatch that rivals the Audi A3 and Mercedes A-class. Once based on a shortened rear-wheel-drive BMW 3-series chassis, the new 1-series is now front-wheel drive – losing a key dynamic attribute of its predecessor.

BMW has done this in order to share its new platform with a swathe of small SUVs, MPVs and Minis that are still to come. Enthusiasts might baulk at the change, but the reality is that it’ll make little difference to many of its previous buyers. But to the rest of us, the 1-series has always formed an entry point to the rear-driven world of BMW performance models, yet rather than move away from notions of a sporty BMW 1-series, BMW has doubled down by revealing a new Golf R-rivalling hot hatch alongside the standard model launch. It’s called the M135i, and its technical package has been almost perfectly aligned to the popular 300bhp all-wheel-drive hot hatch market.

Joining the M135i is a second petrol model dubbed 118i, which features a 1.5-litre turbocharged three-cylinder unit. It’s also found in the standard Mini Cooper and produces 138bhp, with a peak 162lb ft of torque available at 1450rpm. Three further diesel engines complete the current engine range – 116d, 118d and 120d. The 116d is also a three-pot, producing a rather un-BMW-like 116bhp. The 118d and 120d both use BMW’s 2-litre four-cylinder diesel, producing 148bhp and 187bhp respectively.

Three transmissions are available across the range, with 118i, 116d and 118d models all coming with a six-speed manual transmission as standard. The three-cylinder 118i and 116d are also available with an optional seven-speed dual-clutch transmission. All four-cylinder models come with an eight-speed automatic, which is standard on the 120d and M135i. There is no manual option for the M135i – an unsurprising but still disappointing reality.

> Click here for our review of the Mercedes-AMG A35

The new front-drive platform is now pretty standard for the class, combining a transverse engine and transmission layout. The 120d and M135i models pick up xDrive all-wheel drive as standard, but it’s a front-biased system, like a Haldex, and will send at most only 50 per cent of the power rearwards. All models, regardless of their driven wheels, pick up a brake-actuated ‘virtual’ limited-slip differential, aside from the M135i, which features a mechanical LSD. Finally, after eight years, BMW has fitted an LSD to a hot BMW 1-series – it’s just on the wrong axle.

Along with this new technical package comes a new set of proportions that BMW’s designers have had to work with, in the process creating a much more mainstream hatchback profile, in contrast to the previous two generations’ long bonnet and cab-back stance. Many of BMW’s contemporary design details have also been included, like the conjoined kidney grille that draws up the bonnet and tapered LED headlights. The body side is surprisingly generic, and shares a new interpretation of the Hofmeister kink with other recent BMW models such as the G20 3-series.

Inside is another shuffle of familiar BMW elements, with a large, clear set of infotainment and driver information displays dominating the overall layout. M Sport and M135i models include the usual ‘sporty’ elements, including a thicker steering wheel rim, sports seats and technical trim finishes. One advantage of such intensive components sharing is that the 1-series picks up plenty of elements from far larger and more expensive models. You might not complain about your hatchback sharing a steering wheel, infotainment system and control interfaces with a £107k BMW M850i Convertible. However, the sentiment might not be the same from the opposite perspective.

The premium compact segment is not an easy one to compete in, with lots of refreshed rivals in the wings to take on the new 1-series. Its most direct rival will be Audi’s all-new A3, which is due before the end of 2019, while the all-new Volkswagen Golf will precede its slightly posher rival by a couple of months. The Mercedes A-class is also still fresh from its complete overhaul last year. But where the previous BMW 1-series had always been a distinct offering, it might now be in danger of being swallowed up by its widespread and talented rivals. Never has a crisp BMW driving experience been a more crucial attribute than it is now. Due to go on sale later this year, local pricing and specifications will be released closer to launch.