It wouldn’t be the first BMW you’d choose if you were looking for thrills, but the X2’s more enjoyable than you might expect 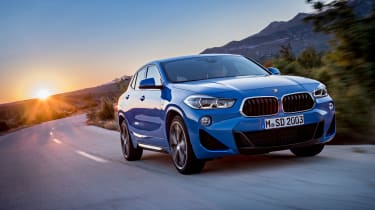 When BMW describes the new X2 it uses words and phrases like dynamic and sporting prowess. It also talks about the car’s coupe-like roofline. All very exciting stuff, especially when one of the top trim lines for the car evoke BMW's past motorsport heritage, apparently, while another has a more rally-like attitude.

Any excitement is mitigated when you remember the X2 is BMW’s latest small SUV and has the ride-height to prove it. But although the reality of a diesel-powered X2 is far less exhilarating a prospect than BMW would have you believe, this car is far from a completely fun free zone.

Don’t expect to find anything to get your adrenal glands pulsating in the X2’s specification; underneath the car is based on BMW’s X1. That means MacPherson strut front suspension and multi-link rear. Also, the engine and gearbox sit at the front, mounted transversely, and power the front wheels. Unless, that is, you specify an xDrive model, then a propshaft sends drive to an electro-hydraulically controlled clutch pack at the rear axle that dictates when the rear wheels reveive torque. Adaptive dampers are an option our test car was fitted with.

> Read our full review of the BMW X1

BMW hasn’t just transferred over the X1’s components wholesale. It’s made small changes to the car’s chassis to make the X2 feel sharper, sportier – more like one its coupes. At the front there’s a greater amount of negative camber and it has thicker anti-roll bars on both axles. 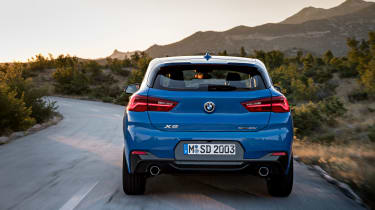 The X2’s layout means that there is only a selection of 2-litre four-cylinder turbocharged engines, all you have to do is choose whether you want petrol or diesel and how powerful you want it to be.

The base model X2, the 18d, has a 2-litre diesel engine that produces 148bhp and 258lb ft of torque. This engine configuration is the only one currently available with the option of either front- and four-wheel drive. Opt for all-wheel drive and the extra traction shaves 0.1sec off the acceleration time resulting in a 0-62mph of 9.2sec.

> Find out what BMW's proper small performance coupé, the M2, is like to drive

The only petrol model available at the X2’s launch is the 20i sDrive and it’s front-wheel drive only. Still, despite the traction disadvantage – and a lot less torque (only 206lb ft) – its 189bhp power output makes it much faster to 62mph, completing the dash in 7.7sec.

The model we tested, the X2 20d, has the same basic engine as the 18d models, but it’s been retuned to deliver both more power and torque, 187bhp and 295lb ft respectively. It’s only available as an xDrive model and with the aid of four-wheel drive it can match the petrol’s 0-62mph time. There’s no choice of gearboxes in the X2, you get an eight-speed automatic as standard. 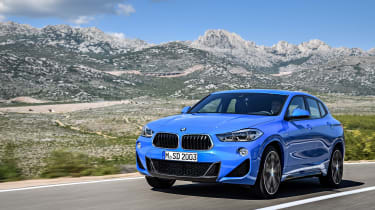 A lot of current BMWs have a level of refinement that far exceeds your expectations, especially in context of the car's price tag. The X2 isn’t such a BMW, it's hardly uncouth or uncomfortable, but there’s more wind and tyre noise than you’d hear in a new X3, 5-series or 6 GT.

Our car was fitted with the optional adaptive dampers and, in comfort mode at least, it was settled, calm and serene when travelling over the Spanish tarmac of our test route. But that luxurious ride translated into pitch and roll as the road got more taxing.

There is a dramatic difference when switching from Comfort to Sport mode, mostly thanks to the adaptive dampers. Push the front of the tunnel-mounted rocker switch and the steering’s weight increases and the chassis tenses, significantly. The bumps that were ironed out by Comfort now make the X2 bounce and quiver slightly as it moves forward. But, when you turn into a corner it feels flatter and, without so much body roll, it’s more predictable and reacts faster to your inputs.

With a softness removed from the chassis the steering transmits more information to your hands and you can sense exactly how much lock you need before asking too much of the front tyres. As a result, you don’t overwork the front axle and understeer isn’t an issue – you can confidently enter a corner close to the cars limits and carry decent speed to the apex.

Your connection with the rear tyres is less transparent, but they find ample grip in most conditions so you can concentrate on getting the best from the front-end. That does mean, however, the BMW X2 isn’t the liveliest of companions – it doesn’t want to rotate slightly under braking, no yaw angle is created with a lift of the throttle and there’s certainly no power-on oversteer. But, what did you expect from a four-wheel drive SUV?

What doesn’t change much when you select Sport is the engine. The revs rise marginally when you change modes, as there’s a little change in the throttle map, but there’s no difference in engine note or volume. The four-cylinder diesel chunters and rattles away just as you’d expect from an oil burner, but although the noise is a little bit coarse the engine’s delivery is more sophisticated. It feels natural to rev it to 4000 – 4500rpm, almost to its 5000rpm limit, as unlike most diesels it doesn’t run out of puff by 3500rpm. Then, with every gear change and drop of revs, there’s a mild but encouraging shove forward as the engine finds peak torque again. 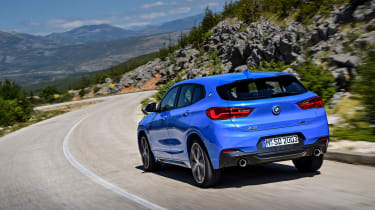 The ratio changes that the eight-speed automatic transmission makes are so swift and fuss free there’s absolutely nothing to be critical of. However, when navigating a mountain road the ‘box struggles to anticipate the ideal gear and only shuffles down a few ratios once you’ve touched the throttle. Push the gear selector to the left and use the wheel-mounted paddles to select your own gears and the engine feels much peppier when you get on the power early in a bend.

There’s not an abundance of things to get excited about from behind the wheel of the X2; it's far from the traditional BMW coupe driving experience. Yet, being able to accurately place the X2, thanks to sharp handling, good feel and a predicable, if a bit safe, chassis certainly has its appeal.

The X2 exists thanks to a huge demand for mini-SUVs, as a result there’s a plethora of cars to choose from. Firstly, from within BMW, there’s the X1 and the Mini Countryman. Both use the same platform and many of the same engines as the X2. The X1 isn’t as sharp to drive or as stylish as the X2, but it’s cheaper and a little more practical.

The Mini trades ultimate space for quirky features and bold design, and it's somewhat cheaper than the BMWs, starting at £23,035 for the base 1.5-litre petrol model. The Cooper SD ALL4 Auto, with a 187bhp 2-litre diesel engine and four-wheel drive – the closest to our test car – costs just £30,540 and has a quicker 0-62mph time of 7.4sec. Despite all this, though, the X2 is the more enjoable car to drive.

Other premium car manufacturers all offer an X2 equivalent. Mercedes-Benz has the GLA; it feels more premium than the X2 even though equivalent models are a little bit cheaper. Audi’s Q3 doesn’t have the sleek coupé-like looks of the X2 and it isn't as sharp to drive but it too is cheaper than the BMW. Jaguar’s newly launched E-Pace goes head-to-head with the X2 too, but its engines are mediocre. 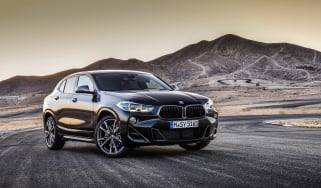 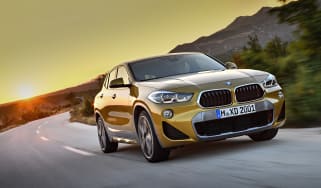