BMW's shrunken X6, the Concept X4, will be unveiled at the Shanghai motor show later this month. Details and pictures here 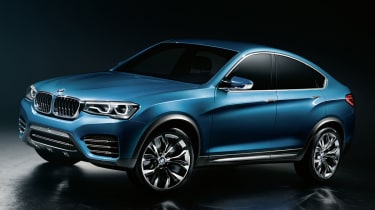 BMW has released photos of its newest ‘sports activity coupe’ show car: Concept X4. Very much resembling the larger X6, BMW plans to show off its latest concept car at the Shanghai Motor Show towards the end of April.

Given that the Concept X4 and X3 have the same wheelbase, it’s safe to say that basic architecture will be shared between the two vehicles. The Concept X4’s total length is longer than the X3 however - giving it a more aggressive stance - just 231mm shy of the X6. It’s also about 70mm lower and wider than the X6.

A pair of large front air intakes flank the trademark kidney grille, and the large wheel arches are filled out with 21-inch bi-colour alloys. Some of the obvious concept car design touches, like the mirrors and lights, will be changed before the car goes on sale – although the overall design will remain almost unchanged for production.

Pricing details are not yet available but its believed that the X4 will come in around £3000 over equivalent X3 models. The production model will make make its debut later in the year at Frankfurt, with the car scheduled to go on sale in 2014.