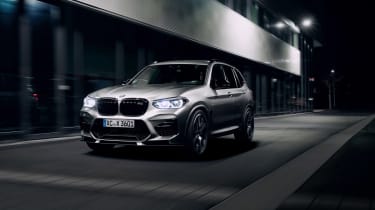 As you can imagine given our recent review, the best method for improving BMW’s X3 M would be to melt everything down and turn it into a different car entirely, but for those more inclined to modify, AC Schnitzer’s new line of components might be of interest.

Central to the changes is a performance upgrade for the 3-litre straight-six, though AC Schnitzer also offers components for the suspension, styling and interior, as well as a couple of new wheel and tyre packages.

As standard, the X3 M’s six-pot – it will also arrive in the next-gen BMW M3 and M4 – makes 503bhp at 6250rpm. The relative ease of extracting performance from turbocharged engines means Schnitzer has been able to take this up to 591bhp, which should in theory drop the standard 4.1sec 0-62mph time under four seconds.

Putting this power to the ground is a set of either AC1 or AC2-design alloy wheels, the former being 20 inches in diameter and the latter a full 22 inches. The smaller option comes wrapped in 255/45 and 265/45 tyres front and rear, with the 22s and their nine-inch width coming with 265/35s up front and 275/35s on the back axle. 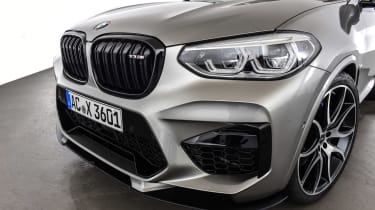 Further altering the car’s stance is AC Schnitzer’s spring kit, trimming 20-25mm from the ride height at both ends of the car. Hopefully this won’t exacerbate the X3 M’s startlingly poor ride quality, nor put some of Schnitzer’s new aero components at risk. Available exterior parts include a front splitter, a small rear wing installed within the existing spoiler, and protective film for the rear skirt.

Interior changes are modest, focusing on Schnitzer’s usual aluminium components: a set of pedals, a footrest cover, a keyholder and an iDrive controller cover, plus perhaps the most welcome change, a set of new gearshift paddles to replace BMW’s usual plastic items.