Due to be unveiled at the Beijing motor show, the first images and details of the plug-in hybrid BMW i8 Spyder have been released. 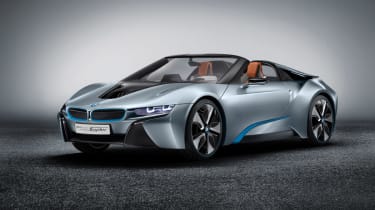 BMW has officially revealed initial images and details of the i8 Spyder ahead of its first public showing at the Beijing motor show on 23 April.

Although this is effectively just a convertible version of the i8 coupe concept that was unveiled last year, the car has been somewhat refined and has lost the transparent side panels - now looking somewhat more production-ready.

Like the coupe, it's a combination of carbon fibre and lightweight aluminium, the spyder losing a few inches out of the wheelbase, doing away with the rear seats completely.

The hybrid package features a 220bhp turbocharged three-cylinder petrol engine, powering the rear wheels, and a 129bhp electric motor driving the fronts. This combination ensures that there's no shortage of go, with a total power output of 349bhp and 406lb ft of torque.

BMW claims the hybrid will sprint from 0-62mph in just five seconds, all the way to a limited 155mph - not quite Porsche 918 territory, but still impressive. Thanks to its relatively light weight of 1650kg, with the super-efficient drivetrain, BMW's two-seater can achieve fuel economy of up to 94mpg.

Although the Spyder is a full hybrid, the battery can also be fully-charged via a domestic wall-socket in about two hours, which will allow the i8 to drive on pure electric for up to 17 miles.