Front-wheel-drive BMWs on the way

BMW has revealed details of the new 'Active Tourer' concept, which will lead the way for a range of FWD BMWs 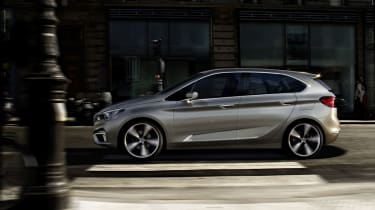 BMW has uncovered a new concept car, called the Active Tourer, which showcases the company’s new small car platform. The new platform will form the basis for the company’s range of front-wheel-drive cars, and also the next generation Mini.

The Active Tourer is a five-door hatchback, with a transverse three-cylinder engine up-front, and a plug-in hybrid system mounted at the rear, effectively making the concept four-wheel drive. Claimed combined power output for the engine and motor is 187bhp.

Aiming at the premium end of the family market, it’s pushing the switch to front-wheel-drive architecture as a more space-efficient way of packaging a car. Although most manufacturers cottoned onto this fact decades ago, it’s a first for BMW, which in the past has only ever offered rear or four-wheel-drive models.

BMW has also released details of the new 1.5-litre three-cylinder engine, which is powering the concept. The three-cylinder turbocharged petrol is the first engine in a new modular family – which will allow much more component sharing between three, four and six-cylinder petrol and diesel engines.