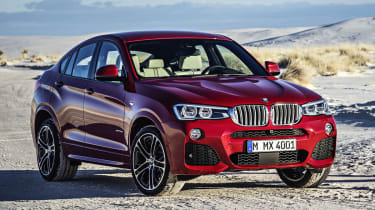 The BMW X4 has been officially unveiled in production form, ahead of its official debut at the New York motor show next month. The new model emulates the larger X6 model, bridging the gap between SUV and Coupe adding yet another niche model to the range.

BMW sees the X4 as a more affordable and smaller option to the X6, which has been a huge success for the company in the USA. It will rival the recent Porsche Macan and Range Rover Evoque, as there is huge demand in this recently created sector.

We first saw the X4 in concept form back in April 2013, and little has changed during its journey to production. Based on the same platform as the X3, the new X4 features a much curvier roofline, similar to the 4 Series Gran Coupe. In fact, it shares a lot of its styling DNA with the Gran Coupe, especially towards the rear of the car, including its taillights.

Similarities with the X3 can be seen at the front too, although the X4 gets a much more aggressive front bumper treatment, with larger air intakes and larger kidney grille. The bonnet has more shape to it, while the X4’s flanks feature three bold swage lines.

When it goes on sale in the UK later in the year, BMW has confirmed that it will only be available with diesel engines. Entering at the bottom of the range is the X4 20d, which features the 187bhp 2.0-litre diesel engine, with the top spec 35d model getting the 308bhp 3.0-litre straight-six engine. This top model can crack 62mph in 5.2secs, going onto a 145mph top speed. A 30d model featuring a detuned 255bhp version of the same engine will also be available.

All models will come with xDrive four-wheel drive as standard, as well as a six-speed manual gearbox although the ZF eight-speed automatic gearbox will be available as an option. UK prices will start from £36,590 for the X4 20d, rising to £48,490 for the top-spec 35d variant.