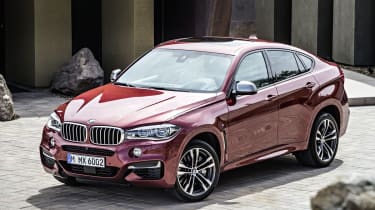 BMW has unveiled the latest version of its flagship SUV, the 2014 X6. The outgoing flagship SUV sold around a quarter of a million units worldwide, so unsurprisingly this new model represents evolution rather than revolution in order to build on that success, largely featuring styling upgrades and updated engines.

The new car is based on the X5, sharing the same 2933mm wheelbase, but giving it a far lower and curvy roofline. It’s actually 60mm lower, while the car measures in at 23mm longer in total. Much like other new cars in BMW’s line-up, the new X6 features headlights that flow into kidney grilles and aero efficient devices such as Air Curtains and Air Breathers, these working to reduce drag and fuel consumption.

Inside the new X6 features improved practically, with a new 20:40:20 folding rear bench (the outgoing car featured a 60:40) and 580-litres of boot space. With the seats folded down there’s 1525-litres, an increase of 75-litres over the outgoing car.

Along with this practicality come new styling options, including the range topping Design Pure Extravagance. As the name suggests, ticking the box for this option sees a raft of aesthetical improvements brought to the X6’s interior and exterior, including bespoke 20-inch alloy wheels, aluminium window-line surrounds and mirror covers. Underbody guards are also enhanced in stainless steel, whilst the interior matches with chrome buttons and extra leather.

For those looking for performance and fuel efficiency, there will be the M50d, which is just four tenths slower to 60 than the 50i, includes Adaptive M suspension and sports settings for steering and dampers, along with the extended range of a diesel.

Other new features for the X6 include technology to brake and accelerate automatically in traffic, as well as a head up display and a lane holding system. The new car will go on sale in the UK in December 2014, with prices expected to start at around the £50,000 mark.