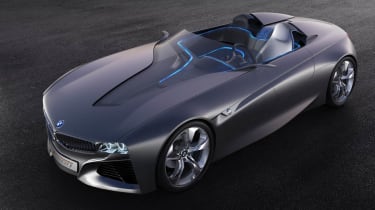 BMW’s big news at Geneva will be this, the ungainly-named Vision ConnectedDrive. Intended to showcase the ‘intelligent networking of driver, vehicle and the outside world into the future’, BMW claims it sets new standards in comfort, infotainment and safety. Three words that don’t exactly reflect the ethos of an aggressively styled speedster, we have to say.

There’s some Bangle-esque surfacing along the flanks and unusual treatment of the windscreen, but the focus is on innovative technology. The interior is divided into what BMW are terming ‘layers’, that are intended to break up large expanses of interior, creating more space for ventilation and controls.

Fin-shaped antennas replace conventional wing mirrors, and pick up navigation, traffic information and mobile internet. Inside, different areas of the car are defined by coloured fibre optic strands, which light up when a function is activated, to show the path taken by information through the car.

There’s the usual concept car array of features, including head-up display, a separate info display for the passenger, sensors that detect objects close to the car, and best of all a car-to-car interface that enables communication with other vehicles in the vicinity to anticipate unfolding accident scenarios. All well and good unless the car coming round the blind corner on the wrong side doesn’t have the same technology.

In a development of the Z1’s vertical drop doors, the Vision ConnectedDrive uses two-piece sliding doors, which retract into the bodywork. BMW say it is possible to drive the car with the outer door shells retracted, although presumably for side impact protection and the avoidance of Brian Harvey moments, you cannot go for the full open door effect whilst on the move.

Being a concept, The BMW Vision ConnectedDrive will not make production in current form - nor is there any word on what it's powered by. However, expect to see some of the technology and features showcased by the Geneva show car trickling down to future production models.