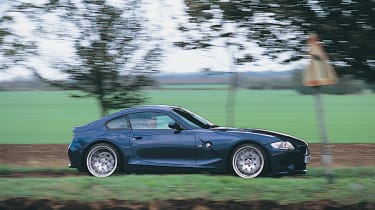 We should love the Z4 M Coupe. After all, with an uncompromising dynamic focus, tight, muscular styling and M Power’s fizzing straight-six engine, it has five stars written all over it. Or so we thought.

Sadly, when we pitched it against the Porsche Cayman S (097), it revealed a propensity for understeer and a confidence-denting sense of disunity between the front and rear ends. It also suffered from a choppy ride. In short, while an undeniably invigorating and appealing package, it fell short of the cohesion and polish so readily displayed by the Porsche, not to mention BMW’s enduring in-house hero, the M3 CS.

So, what do we have here? An early factory update aimed at rectifying the shortcomings? Well, yes and no, for while this particular Z4 M is fitted only with official BMW parts, the imaginative, intelligent and highly effective changes have been wrought not by the factory but by a customer.

A serial BMW owner with a passion for Bavaria’s swifter products (he also has an immaculate M3 CSL with some choice modifications, and an X5 4.8is), Steve Davies’s Z4 M Coupe is the product of a subtle series of modest dynamic and cosmetic tweaks.

Like us, Davies was frustrated at the Z4 M Coupe’s lack of front-end grip, rightly attributing it to BMW’s risible decision to fit it with ContiSportContact tyres which are some two generations out of date. Having decided to replace them with Michelin Pilot Sports 2s, Davies also chose a set of gorgeous M3 CSL rims, which in addition to transforming the Z4 M’s looks also increase the rim diameter by an inch (to 19in) and reduce unsprung weight by a total of some 7kg.

In an effort to further distinguish his Z4 M from the lesser 3-litre model, Davies also fitted a pair of side skirts, picked from the M Sport range of body styling parts. Like the CSL rims, they have a subtle but amazing effect on the look of the car. In fact we’d go so far as to say that all Z4 M Coupes should leave the factory this way.

The final stage of Davies’ makeover was a strut brace, again chosen from the Z4 accessories catalogue. At just £200 it’s a modest outlay, but it has a tangible effect on improving the front end’s rigidity by spanning the Z4’s sizeable engine bay.

To be honest, the cosmetic effects of the wheels, tyres and side skirts more than justify the outlay (Davies reckons his tweaks have added no more than £2500 to the car’s cost, including fitting and painting by his BMW dealer), but the improvement in feel and response is even more compelling.

Where the standard car lacks incisive turn-in and, ultimately, front-end grip, Davies’s car is more immediate and confidence inspiring. It also has the grip to back up the instant turn-in, so that you’re more prepared to commit to the corner, safe in the knowledge that the nose isn’t about to wash wide of your intended trajectory.

It’s not a complete transformation. Indeed, as Davies readily concedes, the car still displays the same sharp-edged low-speed ride and remains keen to trigger the ASR system when accelerating hard on lumpy tarmac. However, the sharper, grippier front end is better able to harmonise with the rear, which makes it a much more positive machine to hustle – more intuitive and entertaining when you want to provoke it, yet sweeter and more cohesive when you want to make smooth, swift progress.

A definite improvement, both dynamically and visually, Davies’s upgrades release more of the Z4 M Coupe’s obvious potential. While they don’t quite justify promoting the brawny BMW coupe to full five-star status, they do mean it thoroughly deserves its four-and-a-half star rating, rather than just scraping it, as was the case. And, while it still lacks the consummate all-round polish of the Cayman S, the Z4 M Coupe’s new-found grip, balance and exploitability allow you to enjoy its clear power advantage and extrovert character all the more.