Was it or wasn't it a Z4? New images reveal the truth 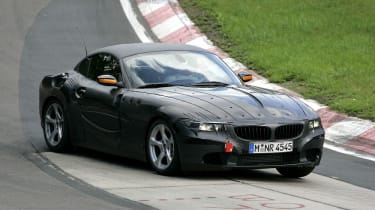 Over the past few months there were quite some heated debates about whether the covered-up BMW prototype was the new generation Z4 or an entirely new roadster. After a lot of contemplating, we can now safely say that it was the Z4 after all.

These fresh-from-the-Nurburgring spy photos to prove it. A few things stand out, but mostly that the prototype has lost its hard-plastic nose cover and is now only wearing flimsy ducktape but clearly showing the kidney grill we learned to love. The remainder of the car is still clad in the hard-plastic coverings and we can only hope that it will loose some more camouflage on its next round on the Ring.