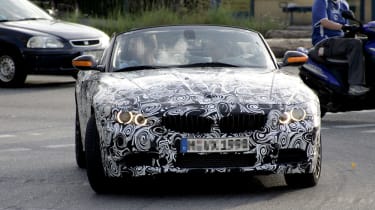 Instead of a fabric affair, the new Z4 is following in the footsteps of its 3-Series Convertible big brother, plus its Mercedes SLK rival, with a retractable steel top. As these pictures of a less disguised prototype show better than ever before, the car will also get a more muscular look. And the convertible has another trick up its sleeve. BMW isn’t content with raining on the SLK’s parade, as it will seek to outgun the Porsche Boxster with a new range of powerful engines for the car. These are likely to include the twin-turbocharged 3.0-litre straight six-cylinder unit. There’s even the possibility that the Z4 will be available with diesel power for the first time, too.

A flagship M model could get the new 4.0-litre V8 from the M3 – although a broad line-up of four-cylinder and normally aspirated six-cylinder petrol powerplants will continue to be offered. All cars will benefit from BMW’s Efficient Dynamics programme, which helps to cut CO2 emissions and boost fuel economy with features such as an engine stop/start facility.

Under the skin, the platform is shared with the latest-generation 3-Series, so the rear-wheel-drive Z4 will continue to provide driver-pleasing handling.

Now that engineers have peeled back all that plastic camouflage, it’s visible that the newcomer measures only around an inch or so longer and wider than the existing Z4. Our sources have also discovered that production is likely to shift from South Carolina in the US to BMW’s plant at Regensburg, Germany. Sales will start late in 2009.