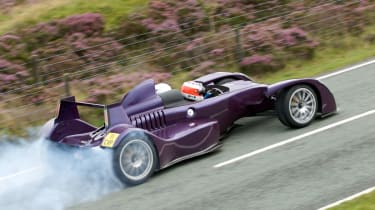 The dream: to build the world’s swiftest road-legal car. The car that could cover the distance between two points on road or track, through a combination of near paralysing acceleration, cornering and braking, faster than any other. It was called the Caparo T1 and, powered by a naturally-aspirated 3.5-litre V8 developing 575bhp, it boasted a power-to-weight ratio of 848bhp per ton (for reference, a McLaren F1 has 560). According to its makers, it was the closest anyone was going to get to piloting a modern F1 car without being a team driver.

Caparo Vehicle Technologies is a UK-based company at the cutting edge of advanced materials and engineering for not only automotive applications but also the aerospace industry. The T1, the creation of two ex-McLaren engineers, was intended as a rolling showcase for Caparo’s various areas of expertise.

On paper, the performance claims looked outrageous: 0-60mph in 2.5sec, 0-100mph in 4.9sec, 0-100-0 in 8.5sec, 3G cornering, 3G braking. The key element was lightness – the T1’s kerb weight was about a third that of an average family saloon. The V8 engine – a joint development between Caparo and Menard Engineering – developed its 575bhp at 10,500rpm. Drive was directed to the rear wheels through a close-ratio sequential six-speed ’box made from magnesium and carbonfibre.

The T1 had its teething problems: it tried to set fire to Jason Plato and Clarkson declared it undriveable, which may have contributed to the fact that only around 20 have been sold. When evo tested it, we couldn’t match the performance claims, though 0-60 in 3.8sec and 0-100 in 6.2 is hardly shabby, but it’s the fastest road car ever on our test circuit. The T1 had fulfilled its remit and remains the most extreme and extraordinary car ever to wear a number-plate.