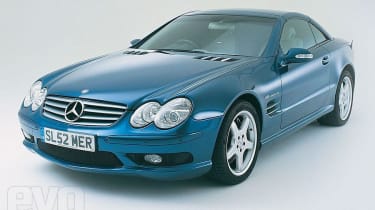 Our feedback from evo-reading SL owners shows a huge variation in the quality of service offered by dealers. Some (usually the family-run establishments) do a good job of looking after their customers, while others appear arrogant and dismissive of problems once you’ve bought the car. Our advice is to get on the internet and ask around for recommendations in your area. Needless to say, you should demand and expect the best after-sale care.

There were a number of quality issues with early SL55s. Some were fine, but others spent a considerable amount of time back at the dealer being fixed. Quality has improved since, but you should examine a car’s history closely. We recommend you call the dealerships who have serviced the car to gather as much information as possible, and buying a UK car will make that task much easier.

There were two recalls concerning the Sensotronic Brake Control system, therefore it’s very important to check that the work has been done. The first (July 2004) was a software download enabling the control unit to monitor wear; the second was to check for faulty hydraulic units, which were replaced as necessary.

Engine maladies are very rare. The SL55’s V8 benefited from considerable strengthening over the 500 unit on which it’s based. Almost every moving part was uprated – even the crankcase was strengthened to deal with the significant increases in temperature and pressure.

The supercharger sits in the middle of the 90degree V and has proved to be an extremely reliable unit, despite spinning at 23,000rpm and providing 0.8bar of boost.

Ensure all fluids are up to the mark and look clean. It’s also worth inspecting the myriad of pipes surrounding the engine for signs of corrosion and leaks (the charge- cooler also has its own radiator and associated plumbing). Repairs can be difficult depending on the site of the problem, as access around that whopping motor is tight.

In most cases you’ll find that all the electrical systems work perfectly, but there are examples of cars that have had numerous issues. As just about every aspect of the SL55 has an associated electrical system, diagnosing and fixing faults can be difficult. It’s not uncommon for cars to go back to the dealer a couple of times before the problem is resolved. Mercedes-Benz dealers are often a better bet than independent garages for electrical work as they have access to fault information at the UK head office in Milton Keynes and, if needed, the Stuttgart factory.

Common problem areas include the traction control system, electric windows and the fly-by-wire throttle, but these usually occur early in the life of the car, so should have been resolved by the original owner. The optional ‘keyless go’ and tyre pressure monitor systems are known to play up occasionally too.

Ensure the recall for the voltage regulator was adhered to – there have been instances of the batteries discharging within a couple of weeks.

The big 355mm discs with eight-pot callipers up front are very effective, but also expensive to replace. The braking system is complicated, what with Sensotronic (which claims to provide smoother braking), Emergency Brake Assist and ESP, but it has proved to be reliable. Wear rates inevitably reflect the way the brakes are used, which means you can tell how hard an SL’s previous owners have been driving. Expect to see 20,000 miles for the pads and 30,000 for discs under normal, non-track driving.

There have been a number of cases where the SL roof system has failed dramatically and catastrophically. It usually happens before 10,000 miles and involves the roof mechanism getting out of sync and collapsing in a heap, necessitating a rebuild.

Some roofs have been known to rattle and have problems while operating, but these usually just require realignment. However, be wary of buying an SL with a roof that isn’t perfect, as this can also point to poorly repaired accident damage.

The other big problem with the SL roof is that it can leak badly into the boot. This was particularly prevalent in early examples and there was no permanent cure until 2005 (the solution involves the replacement of all the seals). Thankfully this problem is now rare, but you should examine the boot lining carefully for signs of dampness and damage.

A number of cars have had the fuel tanks replaced under warranty due to a failure with the lifter pump. You will hear the problem, as the pump starts ticking when fuel has dropped below three-quarters full.

Struts are known to fail, and cost around £1000 per corner to fix. For this reason you should ensure that any car you are thinking of purchasing has been examined by an expert. These failures are neither age- nor mileage- related, but will be covered under a warranty. Also, there have been cases of the hoses for the ABC system splitting. If this happens you will find a pool of fluid sitting under the car.

The SL55 has variable service intervals. With average driving (and no track work) you should expect the first service to arrive at around 12,000 miles or two years and cost between £300 and £350 depending on the dealer. The slightly larger service that will arrive between 20,000 and 24,000 miles will cost around £500. Added to this there are also consumables that need to be changed at specific intervals: the brake fluid should be renewed at two years (around £200), at three years the coolant needs to be replaced (£130), at four years eight new spark plugs will set you back £400, while the air filter (£100) and fuel filter (£200) will need replacing at the same time. Finally, every five years the automatic transmission oil and filter need to be changed (£250).

New cars now list at just under £100,000 before options. It’s possible to get some healthy discounts – we’ve heard of £9000 lopped off the sticker price – but they’re nothing compared with some of the amazing second-hand deals out there. The cheapest cars (early 2002 models with at least 40,000 on the clock) are now available for as little as £35K privately, but you should take a lot of care buying one of these. Around £42K will get you a similar and tidier version from an independent dealer, while a franchise would charge an extra £1500. A 20,000-mile 54-plater with all the right history comes in at around £55K at a Mercedes dealer, while an ’06 car with half the mileage would be £70,000.