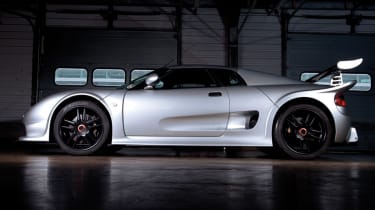 Noble used to have a small dealer network, and the same dealers can usually still maintain the cars today. There are specialists too, such as Plans Motorsport in Surrey, whose Graham Horgan is our guide here. Engine

‘Some early cars had engine failures through oil starvation if used vigorously on the track,’ says Horgan, ‘so Noble designed a trackday sump to cure it. It’s an aluminium fabrication with a big lump on the side. Also, very early cars had Magneti Marelli engine management, which was very unreliable. Later cars have a much better MBE system and it should have been retrofitted to the earliest cars by now. Check for the MBE logo on the ECU.

‘The fuel pump isn’t really up to the job and can overheat, not helped by poor wiring. It’s in the wheelarch and gets covered in road muck, which corrodes the connections. The bank of fuses in the engine bay can also suffer water damage, especially if the car is left standing outside.‘The engine itself is very strong and reliable, but the oil pipes to the turbos can be damaged by exhaust heat.’Later cars have twin radiator fans – a wise upgrade for an early car.

‘The five-speed gearbox is much weaker than the six-speed, and breaks its fifth gear, but they all have nylon bushes, which aren’t strong enough. A gearbox upgrade with metal bearings and shot-peened gears is £3500 plus VAT. The gearchange was never great, but slack cables can be adjusted. Don’t worry about a soggy shift on 3-litre cars – they’re all like that. Noble did an M400-type upgrade kit for £1500, but it doesn’t change it much. ‘The biggest improvement is to fit the Quaife differential if the car doesn’t already have one.’

‘The suspension’s lower balljoints wear, but they are easily changed. The wishbone bushes last well but the guide bushes in the steering rack can wear out. They can be replaced, so it doesn’t mean a new rack. Most cars have Bilstein dampers but some are on Konis. They have quite a hard life and eventually they’ll leak and go soft. ‘The brakes are off-the-shelf AP Racing and very good, but the front discs wear quickly and are expensive.’ Chassis, bodywork, interior

‘The glassfibre is good quality, but the panel alignment is completely hit-and-miss, with every piece individually fettled. Repairs must be done by a proper glassfibre specialist, and new panels are available from South Africa, although delivery can be slow.

‘The chassis can get damaged in an accident so check for bent tubes. Some garages cut away a tube to make it easier to take the gearbox out, then weld the tube back in. So check for welds that shouldn’t be there.‘Window and door seals get displaced and often leak, so check for a wet floor and carpets. Water can also get in through the joint at the edge of the floor. We take the whole floor off – it’s sheet aluminium – and reseal it. It can be a 20-hour, £1000 job.’

Parts Prices (Supplied by Plans Motorsport, Dunsfold, Surrey. Tyre prices from blackcircles.com. All prices include VAT at 20 per cent)

Nobles hold on to their value well, reflecting their credibility among enthusiasts and the fact that, with the right updates, they can be reliable. The very earliest cars dip under £20,000 now, and few Nobles have done big mileages so such cars can be a great buy if there’s evidence of maintenance and bug fixes. At the other extreme, an end-of-the-line 2006 GTO-3R can be in the mid-£30Ks – around two-thirds of the cost new. Long-term, good M12s will surely appreciate in value.