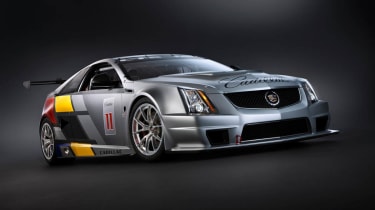 Cadillac has revealed its CTS-V Coupe racing car. And with its BMW Art Car-esque livery and colossal rear wing, it’s set to be one of the wilder displays at the 2011 Detroit motor show. While no technical specifications have yet been revealed, the road-going production car uses a supercharged 6.2-litre V8 engine, which boasts outputs of 556bhp and 551lb ft. That’s enough for a claimed sub-4.0sec sprint to 60mph and a 191mph top speed… Two CTS-V racers will be entered into the 2011 America World Challenge GT series, with Johnny O’Connell and Andy Pilgrim as drivers. Tests of the car begin this month at Florida’s Sebring Raceway while the racing season kicks off on March 25 at St Petersburg, also in Florida. Read our Cadillac CTS-V review here See pictures of the Cadillac CTS-V Coupe The CTS-V battles muscle car rivals on evo video