Cadillac reveals the two-door version of its CTS-V muscle car. 556bhp and sub-4sec to 60mph 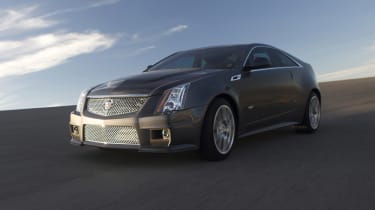 Cadillac has announced details of its new CTS-V coupe, and at first glance it appears Audi’s forthcoming RS5 may have something to chew on.  This car draws performance largely from the saloon version of the CTS-V we’ve previously tested, but with a few tweaks making this car unique. 0-60mph will flash by in just 3.9sec thanks to 556bhp and 551lb ft torque.  As well as being two inches shorter and lower than the saloon, the rear track is also nearly an inch wider. We’d be interested to see what affect this has on the ride, as the car also weighs a little less. The front grille has been designed so it flows twice as much air to the Eaton supercharger hiding under that distinctive bump on the bonnet, and the rear end with twin centre-mounted exhausts is borrowed from the regular CTS coupe’s design.  And who needs door handles? Not Caddy! The two doors on the CTS-V coupe open via a touchpad system. The exclusive wheels are 19in in size and come wrapped in Michelin Pilot Sport PS2 rubber. Behind these sit six-pot Brembo brakes at the front, with four-pots at the rear. Interestingly for an American muscle car, Cadillac states it’s been working on making this car quieter. For example, a clever new four-lobe rotor supercharger keeps the whining to a minimum while maintaining the staggering performance levels which enabled the CTS-V to become the fastest production saloon around the Nürburgring with a time of 7min 59.32sec.  So, it’s lighter than the saloon, it’s smaller and it has the same power. We have to assume this car will lap the Nordschleife even faster than its bigger brother - which is sure to ruffle some German feathers in 2010.