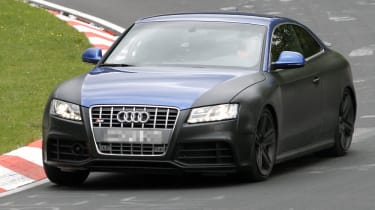 The latest Audi RS model is out testing at the Nurburgring, and it’s set to be another cracker. The RS5 is the hottest version of the A5 coupe, and should be a totally different animal to the existing S5 and its refined cruising abilities.

The RS5 is set to use a tweaked version of the brilliant RS4’s 4.2-litre V8 engine, with power cranked up ten per cent to around 450bhp, but emissions cut, providing the best of both worlds.

Predictably it’ll get Audi’s famed quattro AWD system, although it’ll have a rearward bias. It will be mated to Audi’s twin-clutch S Tronic transmission, a first for an Audi RS.  There’s also the introduction of active aerodynamics (featuring a deployable rear spoiler) and a new torque vectoring system that controls the rear diff.

Styling will be suitably aggressive to mark it out from the S5, with prices set to be around £50,000. A crowd-pulling bout with the BMW M3 awaits...