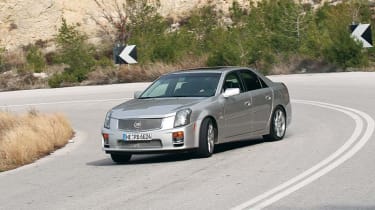 Cadillac. Not a name that conjures up thoughts of sportiness. Bloated luxury barges, yes. Compact and finely honed sporty cars, no. All that is changing, though, because Cadillac sees European-style driving dynamics as a valuable asset, not only for its current push into European markets, but also for enhancing the appeal of its cars in the US. It appears to be working over there, and the key car is the CTS. Launched in 2002, the CTS introduced the edgy 'art and science' styling that is now shared with the majority of the range. It was also built on a new rear-drive platform and introduced Cadillac's first manual gearbox for 50 years. The revised range coming to Europe includes this model, the CTS-V. Powered by a 400bhp version of the Corvette's LS6 5.7-litre V8, hooked up to a six-speed manual, it's apparently the most powerful Cadillac ever. It's also the first product of GM's recently established Performance Division and is underpinned by the 'Sigma' chassis - a rear-drive platform with double- wishbone front suspension and a fully independent five-link rear with a limited slip diff. This has been honed under the guidance of a 'spiritual leader' from GM Europe's chassis engineering department, Michael Harder, whose benchmark cars for the CTS-V included the M3 and last- generation (E39) M5, AMG Mercedes and RS Audis. The Cadillac is, in fact, slightly smaller than a 5-series BMW and the development programme included hundreds of laps of the old N