The Sirion SX is an endearing pocket rocket with an exuberance of character and a cheeky sub-£10,000 price tag 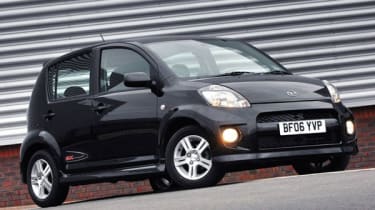 It rolls a lot. Its wheels look too small for its tall body. Its steering verges on the over-assisted. It's not super quick. And yet... the Daihatsu Sirion SX has an exuberance of character that'll have you grinning all the way to Tesco. And back.

One of those vertical over-achievers that the Japanese produce occasionally, the SX is simply a tarted-up version of the regular 1.3 Sirion. It's not really being marketed as a hot or even warm hatch, but its racy little alloys and deeper-than-standard front spoiler lend it some visual clout.

That 1.3-litre engine is in the zone from 3000 to 5000rpm, a fat wodge of torque giving it an enthusiastic response to the throttle and some real zing, though it verges on coarseness toward the 7000rpm red line.

Without massive muscle to play with, you have to carry speed through corners. Disregard the tyre squeal as there's still grip to come, enjoy the crisp turn-in that lays beneath the power assistance, feel the chassis moving around once the initial shock of the body-roll has worn off, and you'll be having a whale of a time.

It's a remarkably jolly device with a cheeky little £9290 price tag and an equally upbeat Group 6D insurance rating, ideal for younger drivers. Just be warned that its gung-ho nature means you'll often be going quicker than you think.