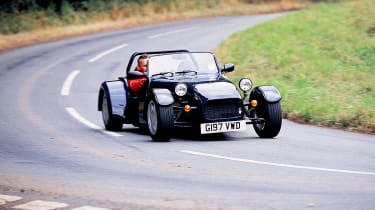 At a glance this budget Westfield looks like any other, but look again. Recognise those neat alloys? They’re off an original Mazda MX-5. The penny doesn’t so much drop as hit you between the eyes – as a donor car for an inexpensive, self-build sports car, the little Mazda is near perfect. For starters it has the classic front-engine/rear-drive layout, and although the sweet little 1.6-litre twin-cam ‘four’ produces only 109bhp, that should be enough for lively performance in a car that’s about half the weight.

The idea of an MX-5-based Westfield was originally suggested by Richard Smith, son of Westfield founder Chris. ‘He kept going on about it,’ recalls Chris, ‘so we got a car in, stripped it down and had a look at what we could use.’

To some degree, it was a case of necessity being the mother of invention. For many years the entry-level Westfield has been based around Sierra mechanicals, but the once-ubiquitous Ford is now very rare. ‘Some people are even restoring them,’ says Holly Bond, Chris’s daughter. There’s no shortage of MX-5 parts, though. The world’s best-selling sports car has been around since 1989 and there are a number of breakers and parts specialists around the UK.

As the dismantling of that first donor MX-5 progressed, the Westfield team realised that it could incorporate a surprising number of the Mazda’s components into the original kit with few alterations. As well as the engine, gearbox, diff and driveshafts, it was possible to utilise the front and rear hubs, brakes and wheels, steering rack, upper steering column with stalks and instruments, and also the wiring loom, complete with ECU and fuse boxes.

So here’s the deal: the kit costs £6450 including VAT, a scrapped or crashed MX-5 (or imported Eunos) is £1000 or less, so potentially you can build yourself a sports car for under £8000. The result should be a much sweeter car than was ever the case with the heavier Ford parts, and to judge by this Westfield demonstrator, the Mazda mechanicals have plenty of useful life left in them even when they’ve racked up over 120,000 miles.

It’s a tidy enough car, if obviously built down to a price (there’s no roof included), with comfortable, supportive seats and good visibility. The MX-5 instrument pack is incorporated neatly, but the mismatched minor switches look untidy.

With a side-exit exhaust, the 1.6-litre engine has a smooth, fruity rasp and pulls gamely, while the gearlever, a fraction of a stretch away, has that engagingly crisp, short-throw action that added to the Mazda’s appeal. The steering is surprisingly light, but you get used to that, and the ride is soft and a bit jiggly over town-speed ripples, suggesting it could be more tightly damped without making the car feel too firm. The only area in serious need of improvement is the brake feel – response is woolly, and when you press harder it feels like you’re standing on a football, which saps your confidence.

The engine may be blessed with only 99lb ft of torque, but with so little weight to haul, the Westfield pulls the high gears with enthusiasm, making for relaxed, brisk progress. Drive it more enthusiastically and it reveals a benign, exploitable balance, tucking into turns with reasonable keenness and adopting a four-square, neutral stance mid-corner that can be edged into easily managed, slow-motion oversteer. It would make a friendly first trackday car for a novice.

There’s clearly a great deal of potential to make it a much more precise and rewarding drivers’ car, though. Indeed, such is the quality of the drivetrain that you feel that it deserves a keener chassis to exploit it. Of course, a vast number of tuners around the world (including our own BBR) have produced parts to make the MX-5 go quicker, so there’s huge potential for more power, better brakes and even limited slip diffs.

Personally, I reckon an all-new model designed to use the MX-5 drivetrain in its entirety has great potential. Shape it like a late ’60s sports prototype and you’d have a successor to the Westfield XI.