Tuner creates the Europa that Lotus isn’t allowed to 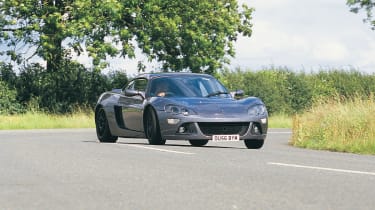 Remember the Lotus Europa? You know, the more accommodating, more civilised Lotus with a torquey turbocharged engine and GT credentials? Oh, come on. Surely you’ve seen lots of affluent types in suits shouting into their Bluetooth headsets looking suave and comfortable in Lotus’s Porsche Cayman rival? No? No, neither have we. In fact a quick straw poll in the office reveals that more than half of us haven’t actually seen a Europa on the road since its launch last year. That’s bad.

But the Europa isn’t a bad car, it’s just compromised: it’s not allowed to be as sexy or as focused as an Exige, nor as pure and simple as an Elise. And no matter what Lotus tells you, the Europa is no Cayman – it’s just too small and low to make a comfortable GT. To top it all, we found early cars had awful engine mapping – the power ‘curve’ looking like a jagged Etch-a-Sketch drawing.

Thorney Motorsport has tried to address all these issues with its Europa R. Sitting up to 70mm lower on Nitron adjustable suspension (£1500) and riding on black Team Dynamics alloys (approx £1000 with tyres), it looks as aggressive as any Exige. It sounds pretty good too, with a full Milltek exhaust system allowing the engine to breathe much more freely.

Taking advantage of this better combustion is an ECU remap (£2500, including the exhaust), boosting power to 240bhp and torque to 270lb ft – up 43bhp and a whopping 70lb ft over the standard car. Obviously, these jumps are tangible, and the Europa suddenly feels very quick indeed – you’d have to work an Exige S very hard to keep up.

Thorney hasn’t stopped there, though. It has also attempted to smooth out the lumpy delivery, and has been largely successful too, the power curve now feeling like just that – a nice smooth curve. There’s still the odd stutter at 4200rpm, and when you upshift at peak revs there’s a long pause between reapplying the power and actually feeling the engine harden to the task again, but it’s a minor frustration.

The revised suspension is much stiffer than the standard Europa’s, perhaps even stiffer than the track-focused Exige’s. The ride is busy but never harsh, though over truly craggy roads you’d probably be quicker with the standard set-up. The handling balance, meanwhile, is superb, with just a bit of understeer that quickly neutralises if you stay on the throttle then gently turns to mild oversteer. The R is a bit edgier on the brakes, though, the tail swinging quickly if you misjudge your entry and need to shed some speed once already turned in.

Essentially the Thorney Motorsport upgrades give the Europa a real edge. It’s a more exciting, more involving car than the slightly confused Europa S. The only problem is that the donor car is so rare you wonder if anyone will ever get to appreciate it.