With Lotus’s help, the new Proton Satria is a decent warm hatch 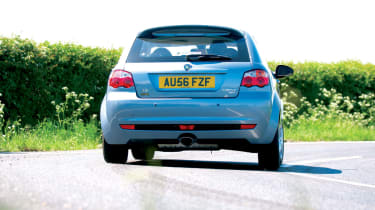 Remember the last Proton Satria? There was one model, the GTi, that was surprisingly good to drive. Surprising, that was, unless you knew that Lotus had sorted the chassis. Now there’s a new Satria, and it too wears a ‘Handling by Lotus’ badge. Once again the dynamics are the most alluring part of the package, though this time Lotus’s involvement includes interior and exterior design and the development of the new 1.3- and 1.6-litre ‘CamPro’ four-cylinder engines, which deliver a respectable 94bhp and 111bhp respectively. The pricing is keen – the 1.3 costs £8995, the 1.6 £9595 – yet the standard spec includes a Blaupunkt CD/MP3 stereo with wheel-mounted controls, 16in alloys and air con. It looks pretty good, too, though the cabin is let down by some brittle plastics, fake TT-style rotary vents and unappealing grey seat fabric, even if the seat itself gives decent lateral support.

The 1.6 sounds slightly thrashy and feels a little down on the quoted outputs – the result, one suspects, of the hefty kerb weight of 1170kg. The claimed 0-62mph time of 11.5sec feels about right. The gearshift is pretty ordinary, and the brakes don’t have the bite you’d really like.

Thankfully, the dynamics lift the experience. Initially it feels like handling has been sacrificed for ride quality; the Satria soaks up a bad road, delivering a smooth, quiet, controlled ride. Tack into a decent turn and, although there’s roll, the steering proves remarkably direct and accurate. Anyone old enough to recall how quick-ish French cars like, say, the 205 and 309 XS used to drive will appreciate the Proton’s dynamics.

Keeping the Satria flowing is key. Grip is OK, but get too enthusiastic on turn-in and fine balance falls into scrubby understeer, the decent 195/50 Conti SportContacts tucking under a little and losing some of their hold. Similarly, if you get on the throttle too hard, too early, the inside wheel spins up and you slip wide (no traction or stability control). But the tail reacts nicely to a bit of lift-off weight transfer, aiding agility, and can be coaxed into modest slip. Finding the limit and staying on it is the challenge.

Ultimately weight blunts performance against rivals such as the Panda 100HP and SportKa. Although the tidy little Proton is bigger, costs less and boasts that ‘Handling by Lotus’ badge, ultimately it lacks their overall appeal.