Britain’s newest sports car hope, the Farbio GTS, is finally here. Time to find out how it measures up 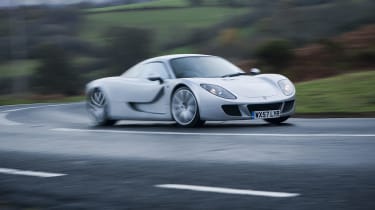 It’s not every day you get invited to the workshops of a new British sports car maker to drive its first car, so I’m glad I’ve got satnav on this dark November morning because ascendant Farbio Sports Cars is tucked away in farm buildings off a narrow lane in rural Wiltshire. Blink and you’d miss the modest wooden plaque bearing the company name.

In the smart reception area of the large converted barn I’m greeted by Chris Marsh, MD of the company and the reason it is located a few miles east of Bristol. The Farbio GTS wasn’t born here, but it’s certainly where it has grown up, and changed its name, too. Star of the recent MPH 07 shows in London and Birmingham, the Farbio began life in Norfolk in 2002 as the Farboud GTS. The vision of well-funded enthusiast Arash Farboud, it was styled, rumour has it, by someone who may have been wielding fat marker pens at Lotus. Whatever, it’s a fine piece of work that still looks good five years later, on the eve of the car’s long-awaited launch.

When Marsh pushes open the door to the spacious workshop I get my first sight of the car in the flesh and, yep, it’s a stunner. Neat and original with some fine detailing, it’s not a big car, but its width and low build give it real presence, especially from the rear.

The shape is pretty much all that remains of the Farboud, Marsh explains. The former Marcos and Invicta man got on board with the project in 2004, then a year ago he found the finances to take over the project fully, with Arash as a shareholder. It’s been a busy 12 months. Perhaps ambitiously for a fledgling car maker, the Farboud GTS was originally a £170K supercar powered by a 440bhp twin-turbo Audi V6, with pushrod-operated inboard suspension and carbon-reinforced glassfibre bodywork. Marsh saw its future at a lower price and in higher volumes: ‘It makes things so much easier because you can get better deals from suppliers, appoint dealers, work on exports…’ The price point Marsh wanted to achieve was around £60K, which would give Farbio a ready-made and hungry market to exploit with the demise of TVR and the new Marcos, the continued absence of Lotus, and Noble’s decision to head upmarket.

Marsh reckons that the benefit of being in the business for years is that he knows exactly what people want in a low-volume car. ‘They want reliability, comfort, proper air conditioning, a quiet cockpit and a good exhaust noise,’ he says. Achieving this and coming in at £60K – £59,925 to be precise – has meant almost completely re-engineering the car, an intensive and expensive undertaking. Already having almost 200 contracted orders in the bank made the investment in time and money easier, and also made hiring the right staff and dealing with suppliers less stressful too. Today the figure for firm orders stands at 450. All Farbio has to do is deliver…

Many observers consider the decision to change the name of the GTS just a few months from launch to be risky, but Marsh explains that since Arash Farboud unveiled his new car, the AF10, customers were becoming confused over what car Marsh and his team were developing. The new name prevents that.

The shape of the GTS may look like the original but the body is all new, and fashioned from carbonfibre, too. One man could easily lift the whole lot. The decision to make it in carbonfibre was easy, says Marsh, who learned about the material while working at Invicta. Not only does it save a lot of weight, helping to achieve a kerb weight of 1048kg, it also gives closer, more consistent panel gaps. To make the car more habitable, Marsh and his team raised the height of the roof by some 75mm, while to make it more practical they’ve added a boot and a lifting engine cover.

Underpinning the body is a steel spaceframe chassis with a built-in roll cage, to which the carbon panels are bonded to enhance structural rigidity. At either end of the spaceframe there are bolt-on crash structures, while the doors carry side impact bars.

The inboard suspension has gone, replaced by straightforward double wishbones all round, but the biggest conceptual change is the powerplant. The Audi engine was ideally configured for a mid-engined application, being longitudinal with the gearbox out back, and offered scope for a range of outputs, but it was far too expensive, says Marsh. The 4.6-litre, 32-valve Ford V8 was considered but proved too bulky, so in the end the team settled for the characterful 3-litre 24-valve V6 from the Mondeo ST220, complete with its six-speed gearbox. With new inlet, exhausts and ECU it delivers a claimed 262bhp, and there is also the option of a Cosworth-developed supercharged version, the Rotrex blower boosting the output to 384bhp. Most orders are for this model, priced at £71,675, says Marsh. Although the V6 is transverse and doesn’t offer such a good weight distribution, the car still comes out at 40:60 front:rear.

The road-registered GTS in front of us is a hand-built development car (the first production car is in build and will be finished by Christmas) but it amply demonstrates the high quality of fit, finish and design. The paint is smooth and glossy, the lacquered carbonfibre surrounds for the rear lights are beautiful and the Khan Design 19in alloys hunker nicely in the arches. The interior is a great success too. Simple but stylish, it features Sparco Milano seats trimmed in the same leather as the facia and door inserts, and an SPA instrument pack similar to the one used on the Ariel Atom but with metal faces and electric blue markings and needles. Particularly impressive is the large touch-screen in the centre that controls the heating/air-conditioning and stereo, and will provide satnav as an option. It avoids the profusion of off-the-shelf switches and knobs normally found in low-volume cars and has been developed by a local company Marsh describes as a ‘military spec’ supplier.

The GTS’s looks sell the car, says Marsh, but I’m itching to find out how it drives. The driving position is low slung, with seat, pedals and (Momo) steering wheel all aligned, and it’s reasonably roomy too. The view through the windscreen is excellent, the outlook a little like an Elise’s, with the kicked-up front-wing edges defining the width, and there’s a clear sight of what’s behind in the rear-view mirror too. Question is, can 262bhp deliver the performance the looks suggest? We shall see.

The V6 sounds lusty, idling with a weighty beat overlaid with a trebly valve-gear fizz. Despite its close proximity it’s not too loud in the cockpit, even when worked hard, yet its gruff, confident note turns heads on the street. It’s gratifying to find that the bespoke, cable-operated gearshift works very well, the gate well defined, the loadings nicely hefty, engagement short and positive. If a low-volume car maker can get a gearshift just-so and engineer hinged, weatherproof doors (the Farbio’s even have a two-stage check mechanism), the rest should be a doddle.

At town speeds the GTS feels spot-on, the ride flat and just the right side of firm, the power-assisted steering perfectly weighted, responsive and consistent. Only the brakes – vented discs with four-pot callipers front and rear – take some getting used to, their top-of-the-pedal bite being rather fierce. ‘AP Racing are getting a slightly harder pad for us which will soften that,’ says Marsh.

First time the throttle hits the carpet in third gear is dramatic. The GTS snaps forward with the alertness that is the preserve of the lightweight or massively potent. Then, as the V6 hits 4500rpm and really fills its lungs, it pushes on with real conviction. It makes a decent sound too, though it is, perhaps, not as pure and enthusiastic-sounding as you might hope. A very neat touch is that as the blue rev-counter needle approaches the red line, its colour changes to purple and then red.

At a cruise, it’s reasonably refined and feels long-legged, the sort of car you could rack up big mileages in without effort. The ride/handling compromise is impressively resolved, the chassis absorbing or rounding off all sorts of tarmac pocks, lesions and scars impressively, yet at the same time the ground-skimming front end feels tightly damped and eager.

The steering is very quick and direct, and backed up by strong grip from the Toyo Proxes T1-R rubber, yet the Farbio doesn’t feel nervous. It flicks into turns with the agility you’d expect of a light car, staying flat and scrub-free, the tail showing little sign of inertia despite packing that V6.

Traction seems undefeatable in the dry, but if you find a wet, tight hairpin, as we did, the GTS will demonstrate that it’s progressive and poised beyond the limit. The torque of the V6 unsticks the 285/35 rear tyres before the apex, the tail shifts gently into oversteer and a relaxed handful of opposite lock steadies the slide. There’s no limited-slip diff, so if you back off to help arrest the slide, when you pick up the power again the inside rear spins and the tail comes back into line. Tidy.

Dynamically the Farbio GTS ticks all the boxes and, interestingly, doesn’t feel like any other car I’ve driven. Its ride is supple yet closely controlled, it grips like it’s on trackday tyres and has keen, direct steering but doesn’t feel twitchy. A sharper, harder Cayman, perhaps?

The GTS is such a handsome car, so right in so many other areas, that it’s almost a relief to find that it’s good to drive too. The normally aspirated model is quick but I can appreciate why the near-400bhp supercharged model is proving so popular. TVR’s entry-level cars had 350bhp, while Nobles and even the last Esprits had at least 300bhp. The Farbio looks like it should have 500bhp. Mind, with three years’ worth of production pre-ordered, the future looks good for Britain’s newest sports car maker, so who knows how the story might develop?