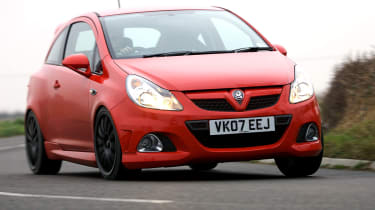 Flooring the Corsa VXR 888’s throttle at tickover and keeping it pinned is not unlike watching a lit fuse-wire. The needle fizzes relatively harmlessly up the rev-counter at first, but as it homes in on the top of the dial you find yourself tensing up as the spark nears the gunpowder. Then – Boom! – 4000rpm arrives, 225bhp explodes at the front wheels and all hell brakes loose as you hurtle forwards. Possibly slightly left or slightly right as well.

It is a very fun car. It looks brasher than a Clio 197 or Cooper S, but it looks good too. The lowered springs (£220) help, as they eliminate the slightly tall appearance of the standard car. And despite the 20mm drop in height, the ride is tremendously well composed too. The black 18in wheels look a bit aftermarket though, and as they bump up the price by a hefty £1360 I think I’d stick with the standard rims.

Under the bonnet is the ECU remap that’s chiefly responsible for lifting the power from 189bhp to 225bhp. Like all 888 upgrades it can be carried out at the VXR Performance Centre in Banbury, this one for £550. I’d suggest that while you’re there you also get the Remus sports exhaust fitted for £475. It adds a bit more power but more importantly an iPod's worth of aural entertainment. Snap through an upshift at high revs and the VXR sounds like it’s spitting stubby anti-lag flames in its wake as reports crackle and pop from the triangular exit.

On roads that have a film of winter gloop, 225bhp is, to be honest, too much for the Corsa. It’s fun trying to control it, and the traction control does a brilliantly subtle job, but on bumpy roads the torque steer is like holding the lead of a hyperactive puppy in each hand. The fact that the steering is still light around the dead-ahead, then sticky as you turn, doesn’t help in the corners either; although the chassis is sharp, you often end up taking a couple of bites at tight turns.

It’s not a dynamic tour de force then, but the excellent damping and electronics mean the Corsa VXR 888 feels a bit silly rather than downright crude, and there’s a lot to make you smile. Think of it as the naughty young pyromaniac nephew of the VXR8 Supercharged.