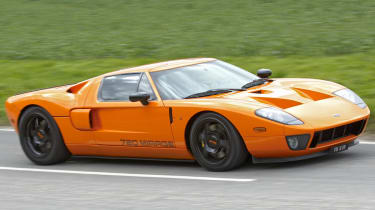 I know what lurks beneath the dark blue car-cover stretched over the low, wide shape in the centre of the showroom, but a tension-building drum-roll would still be appropriate. An elasticated edge is tugged up to reveal a bright orange corner, then the cover slips easily from the rest of the shape, gliding silkily off the high-gloss paintwork until standing before us, in all its naked glory, is the best looking Ford GT I’ve ever seen. Andy McGrath, boss of Avro Motor Cars, might at least have completed the reveal with a showman-like ‘Ta-da!’.

Atomic orange isn’t subtle, but the transformation of the slightly heavy-handed Ford GT into the gorgeous Avro 720 Mirage is all in the detail. The wheels and external brightwork are now matt black, the suspension is an inch lower and the rear bumper has been removed along with all evidence of its existence, an involved but aesthetically rewarding exercise. Complete with a set of retro silver-on-black number plates, the Ford GT now looks smaller and neater, much more like a classic GT40, though in orange and black there are strong hints of Miura too. I want one already and suspect I’ll want one even more after I’ve driven it, since the output of the 5.4-litre supercharged V8 has been increased from the standard car’s 550bhp to a mouth-drying, headline-making 720.

‘There’s no traction control so don’t bother coming down if the forecast is for rain,’ McGrath had said. Now that I’m at Avro’s showroom beside a sun-bathed section of the Brooklands banking in Surrey, McGrath shows me the dyno sheet for this car, the first of just ten Mirages that will be built. Its horsepower actually peaks at 746bhp at 6900rpm. That’s a sniff less than 200bhp up on standard. Torque is similarly engorged, matching the stock car’s 500lb ft at just 2000rpm before going on to hit a peak of 627lb ft.

The Mirage is Avro’s second limited-edition GT. Back in issue 107 we tried the impressive 600RE, developed with Essex-based Roush Europe. It produced 600bhp chiefly through the fitment of a smaller supercharger pulley, revving the ’charger harder and thus producing more boost. Roush has been a partner on the 720 too, bringing together what are considered the best upgrades available to create what McGrath describes as ‘the ultimate Ford GT’.

It takes Roush three to four weeks to turn a zero-mile GT imported from the US into a Mirage. The supply of ‘untitled’ GTs (unregistered cars at US dealerships) is rapidly dwindling and McGrath reckons there are perhaps 20 left. He’s already acquired five and is hoping that the price he pays for the last five won’t be so high that he has to charge more than the £179,400 he’s asking for a 720 Mirage right now. So, apart from the sublime cosmetic rework, what do you get for your money?

Let’s start in the heart of the car. Between the banks of the V8, a higher-volume Whipple supercharger replaces the standard item, raising boost pressure from 10 to 17psi. The engine management is recalibrated so that the twin injectors for each cylinder deliver the appropriate fuel, the intake pipe between the airbox and the supercharger is strengthened to prevent it collapsing as the blower draws its deeper breath, and the rev-limiter is lifted, allowing up to 7000rpm. The basic engine remains untouched, though. ‘It has racing pistons and conrods as standard and is good for getting on for 850bhp,’ says David Jones, Roush Europe’s manager of vehicle engineering.

The huge and heavy silencer box is removed, leaving the muffling duties to the big-capacity catalytic converters. That sounds like a recipe for annoying close neighbours of a morning with a spitefully loud note that sets their breakfast crockery rattling. Not so. At idle the sound that spews from the sawn-off tailpipes is a rich but remarkably mellow throb.

It’s been a while since I got behind the wheel of a GT and the Mirage is a reminder of what an exceptional job the team that created and developed it did. All the controls are positive and precise yet shorn of the effort and recalcitrance you might expect with a supercar. Impressively, this near-750bhp Mirage is as tractable, almost as refined and as easy to drive as the standard Ford GT. Beyond the slightly louder exhaust note, the only hint of its potential is a little extra firmness to its in-town demeanour and the odd slurpy chirrup from its dampers. These are two-way and height-adjustable KW items that can be firmed-up for track work if required. The final upgrade is the AP Racing brake kit that replaces four-pot calipers with six-pots up front and adds fractionally bigger discs all round.

The first opportunity to feel the force of the Mirage comes on the slip road leading down onto the A3. I line it up in second gear at about 1500rpm and press the throttle to the stop. The shove comes clean and strong, growing in intensity as the revs rise, and then, just as it really gets a hold of the Mirage, there’s a flash of clutch-slip and the rev-counter needle pings round the dial. I ease off and grab third, already anticipating the acrid whiff of clutch lining and wondering if the plate will recover enough for me to get a true taste of 746bhp. Damn. And then another thought strikes me. I slow down a little, drop down to second and floor the throttle again. Ah, yes. Not clutch-slip, wheel- spin… Now I know why McGrath wasn’t keen to let the Mirage out in the wet.

It will wheelspin in third on a dry road, yet the chassis copes brilliantly, tracking dead straight as the Goodyear Eagles overspeed and leave thick lines, which is why it initially felt like clutch-slip. Add corners and bumps and it doesn’t feel so much like power acting on the rear wheels so much as a huge unseen force shouldering the back end up the road. The standard car makes deploying 550bhp seem remarkably easy thanks to superb traction and a natural and smooth transition into oversteer, and this progression and composure helps the Mirage too. Even when the torque overwhelms the rear tyres they work hard to maintain forward motion. Still, you pick your full throttle moments carefully, ready for the fight at the rear to spill into an opposite-lock moment.

It’s an incredible engine. The big kick arrives at around 3000rpm and then just builds, the V8 driving hardest between 6000 and 7000rpm. Throttle back and the thunderous overrun sounds like an empty 45-gallon oil drum bouncing down a flight of carpeted stairs. Even on the motorway in top gear, which is good for around 45mph per 1000rpm, the Mirage lunges forward hard when the throttle hits the stop. McGrath reckons it should get to 221mph, which wouldn’t surprise me.

You occasionally hear that a car has such a good chassis that it could handle a lot more power. The Ford GT is one example, though I’d venture that getting on for 750bhp is just a bit more than it can comfortably use. It’s a McLaren and Veyron-rivalling hit when it can, and a surprisingly benign challenge when it can’t, but I reckon some form of boost control would complete what is a very desirable and handsome supercar. It’s safe to say the ten Mirages are going to go fast.