Tuner gives 911 another 109bhp – and lots of nice carbonfibre bits 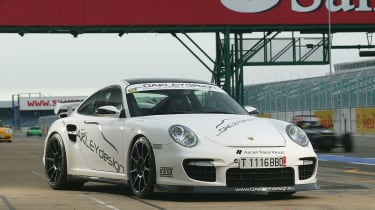 Meddling with a Porsche is a dangerous business. As we’ve seen in the past with Gemballas and TechArts, it’s perfectly possible to swell a 911’s numbers to eye-popping levels, but the car you’re left with might well be anything but an improvement, particularly if you’ve fiddled with the suspension. However, Ruf, 9ff and Manthey have all proved that it can be done well, and with experience garnered through racing Carrera Cup cars, Oakley Design is hoping to join them with its upgrades for the Cayman, GT3 and GT2.

It’s Oakley’s take on the GT2 that we’re trying today. The engine’s outputs will grab the headlines, but it’s worth having a closer look at the wealth of carbonfibre on the car too. The company hasn’t gone down the route of wholesale remodelling, so from a distance you wouldn’t necessarily know that this was anything other than a standard GT2. Look more closely, though, and you’ll see that the front spoiler, the roof, the lip on the rear wing and the wheel rims are all made of the woven black stuff. The aerodynamic parts aren’t just for show either, having been extensively tested in MIRA’s wind tunnel.

Look inside and you’ll see a roll cage. Look closer still and you’ll see that it too is carbonfibre. Made in conjunction with Airbus (a company that knows quite a lot about carbonfibre as the wings of its aeroplanes are increasingly being made out of it), the cage is already TÜV approved and well on the way to getting the FIA’s seal of approval too. As a full carbon cage weighs just 12kg compared with 60kg for a steel one, expect to see one in every race car as soon as the stamp hits the form.

The other obvious addition inside is the tall gearlever. It operates a sequential shift that was originally designed by Siemens for the 996 Cup cars and simply bolts to the existing Porsche gearbox, meaning it can easily be removed and the car returned to standard if required.

On the wet, greasy roads of Northamptonshire, controlling the 632bhp and 593lb ft of torque that have been coaxed from the engine is actually easier than gathering up the 523bhp and 501lb ft of the standard car. The suspension is noticeably stiffer, but bizarrely it is also more compliant. The result is a rear end that breaks traction much more smoothly and progressively, encouraging you to lean on it in a way that you’d be nervous of doing in the standard car. The front end is slightly less successful, because although it works on smooth roads (or a circuit), on a bumpy road it feels disconcertingly light on turn-in – the grip’s there, you just don’t have the confidence to use it.

ECU fiddling and internal fettling have taken the GT2’s power up a little, but the main power and torque increases come from the KKK turbochargers that replace the standard Porsche variable turbine geometry ones. Surprisingly, because the forced-induction storm takes longer to gather in the Oakley car, the delivery is actually not as shocking as it is in the standard GT2. What does take your breath away, though, is the rate of acceleration deep into fourth and fifth gear. The way it piles on speed towards and into three figures is truly awesome. And the sequential shift works a treat – it’s not lightning- fast and you still have to use the clutch, but it’s definitely quicker than an H-pattern.

Oakley Design’s GT2 has certainly been tuned sympathetically and knowledgably. The curious thing is that it’s actually a less ferocious beast than the standard car. Whether you think that’s a good thing or not probably depends on whether or not you secretly want the lion to bite the tamer’s head off when you go to the circus.