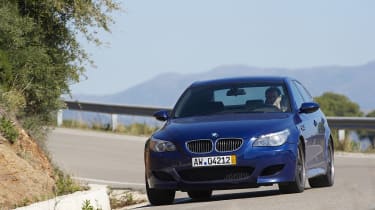 Nothing if not full of surprises, Brabham Racing. While its M3 from hell (in a good way) BT92 understandably took centre stage during the new German tuning outfit’s ‘here we are, this is us’ media bash in Marbella, we couldn’t help noticing that the guys had also brought along a rather tired looking M5 on dodgy aftermarket wheels that, for some reason, had differently coloured front seats. Couldn’t help noticing, either, that every time they started it up, its exhaust throbbed with an altogether deeper, darker timbre than a normal M5’s. If ever a ‘what’s she got under the bonnet?’ question needed answering, we felt, it was this one and it was now. Well a V10, of course, but, to coin an old Michael Jackson-ism, a bad one.

Brabham Racing calls it the BT64 and, to cut a long modification story short, it has a capacity of 5.5 instead of 5.0 litres, 605bhp at 8250rpm instead of 500bhp at 7750rpm and 417 lb ft of torque at 6250rpm instead of 383lb ft at 6100rpm. As installed in the M5, BR claims 0-62mph in 3.9sec, 0-124mph in 11.6sec and an electronically limited top speed of 205mph. The acceleration figures for the M6 are slightly better, and those of the standard versions not even close. Given that the wild BT92 was mildly disappointing (great engine, styling, noise – iffy handling, terrible ride) we didn’t know quite what to expect from a slightly tatty M5. It certainly wasn’t this. I’ll make it simple. The BT64 is armageddon on wheels – simply one of the quickest cars I have ever driven, and that includes all the Ferraris, Lamborghinis and Porsches. Imagine an M5 that feels about 30 per cent more ferocious at the top end but has a powerband so wide that you can stick it in 7th at 2000rpm and still outrun a Bentley Continental GT Speed.

Too much power for the standard chassis? Surprisingly, no. It loved it. Personally, I’d leave the odd seats and naff wheels, remove the badges and give a Ferrari 599 GTB driver the fright of his life. Ace.