Nismo's take on the GT-R. Lighter, tougher, costlier and even better to drive 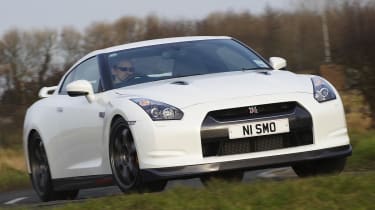 What is it?The ultimate Nissan GT-R, Nismo’s Club Sports version – a £28,500 package of upgrades. Cheaper than a Spec V, too.Technical highlights?Nothing particularly radical here, although carbon seats that save 12kg are a nice touch, likewise the 5kg lighter titanium exhaust system. But it’s the bespoke road springs and three-setting Bilstein dampers that have done the most to modify the car’s manners.What’s it like to drive?It’s still very stiff, moving with bumps at low speed rather than smoothing them over, but pick up the pace and there’s less agitation. What makes the difference is that the Nismo Bilsteins have both bump and rebound control, giving better wheel control, while longer travel rear dampers help keep the rear wheels in better contact under heavy braking. The upshot is that despite the stiffer (by around 20 per cent) springs, the GT-R feels neater, better poised, even more invincible and allows the driver to get back on the power sooner.This car also featured revised engine and gearbox maps. There’s no more power, but the twin turbo V6’s delivery is pumped up low down and sustained longer, while the twin clutch ‘box is cleaner and smoother in its operation.  How does it compare?We already prefer the GT-R to the Porsche 911 Turbo and Audi R8 V10 and the Nismo mods drive the point home even further.  Anything else I need to know?Visually there are one or two tweaks. The wheels are shared with the Spec V and save 1kg per corner, while the exhaust finishers have an aerospace look.

For a more in-depth look at the Nismo GT-R, grab Issue 142 of evo, on sale Weds March 3