We test the Australian sports car, Skelta's rather mad G-Force 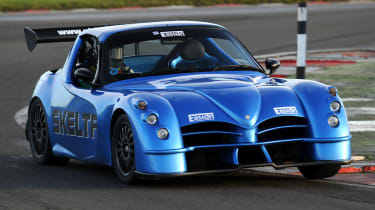 What is it?Somewhat improbably, an Australian lightweight sportscar. The G-Force was created to compete in the southern hemisphere's toughest tarmac rallies, where it's proved capable of running with mega-money exotica. And now a road-legal version is being imported to the UK.

Technical highlights?We've driven an earlier (and considerably uglier) version of the G-Force before (evo test here), but since then it's been given both a much needed front end redesign and a supercharged version of the Honda S2000's VTEC engine. With a claimed 340bhp working against a 720kg kerbweight it now boasts a power-to-weight ratio to rival that of a mid-order supercar. Underneath the carbonfibre bodywork lies a steel spaceframe reinforced with a structural carbon backbone. It's got a roof because Aussie rally regs demand one - but because the same rules don't require it - it does without doors or side windows.

What's it like to drive?Mightily impressive. Get beyond the kitcar looks and the lack of weather protection and the G-Force is an awesome backroad weapon. Straight line performance feels as quick as the numbers suggest, but the Skelta's most impressive dynamic quality is delivered by the rally-grade suspension. With relatively soft springs working with separate reservoir Proflex dampers the G-Force is seemingly impervious to the bumps and compressions of your typical British B-road. Even better, the enormous rear wing (and an equally serious rear diffuser) work together to create major downforce - Skelta claims 200kg at 90mph - with the steering weighting up as the extra grip arrives.

How does it compare?In short, it doesn't. Short of a top-spec Caterham or Atom (and a big saving) there's nothing else even vaguely like the Skelta, and it's impressive performance comes at the cost of a near-total lack of practicality (even a heater will be an optional extra.) The G-Force is an expensive toy, although the knowledge that it's just a roll cage away from being able to run at the front of the Targa Tasmania or Targa New Zealand does have an undeniable appeal.

Anything else I need to know?This forced induction car costs £77,500, but Skelta is also selling the non-supercharged G-Force for an £11,000 saving and we doubt there's much difference in terms of real-world pace. Or, if you're looking for something even more extreme, there's a £122,500 Spyder version with a 460bhp Hartley V8 engine.