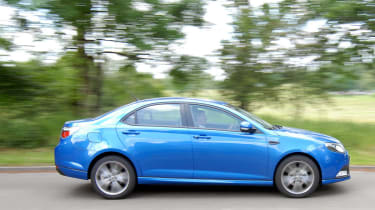 We've already tried the MG6 in five-door hatchback form, and found it to be unexpectedly entertaining with precise, feelsome steering, keen handling and the sort of ride that breathes over Britain's crumbling roads while still feeling engagingly precise. The early car we drove also had some gruesome interior finishes and an inconsistent throttle response from its 158bhp, 1.8-litre N-series engine (a development of the K-series). That hatchback is now named MG6 GT and is joined by a four-door saloon version, called MG6 Magnette. It's the heritage card being played; there were MG Magnette saloons in the 50s and 60s and Magnette sports cars in the 30s. Technical highlights

As with the MG6 GT, the Magnette is assembled in a renovated section of Austin Rover's old Longbridge factory from kits sent from China by MG Motor's parent company, Shanghai Automotive. Much of the design and engineering is British. The underpinnings are loosely related to those of the old Rover 75. The Magnette trades the GT's high hatchback tail for a longer, shapelier one containing a vast boot. The result is a better-looking, more aesthetically balanced car than you might expect. Rear seat space is very generous, with access gained by doors whose window frames are shaped differently from the GT's.

On this second encounter with an MG6, the dashboard design jarred a bit less. The instruments still seem lost in their vast cowling but the prominent slab of plastic above the glovebox now has a semi-matt finish, so the eye isn't dragged towards it as strongly. There's a long list of standard equipment, especially in the top TSE version with its leather seats.

As before, the hydraulically-assisted steering has delightful feel, weight, precision and transparency. The suspension mixes supple springing with taut damping, all of which makes this bulky-looking saloon feel very agile and pointable on a twisting road. Its cornering attitude is nicely throttle-adjustable, and the whole car has something of the feel of the original Ford Focus.

Revisions to the engine mapping have banished the flat spots and made the throttle's action more progressive. It's quieter, too, but the 158 horses still feel undernourished. Top speed is limited to 120mph, incidentally, because it reduces insurance premiums.

MG says the Magnette is a sports saloon with much of the appeal of a BMW 3-series at a much lower price. There's something in that, with a taste of Subaru Impreza or Mitsubishi Lancer also thrown into the shopping basket. It has no direct rival.