Finally, we've driven the production version of the KZ1 - and it's very good, but very costly 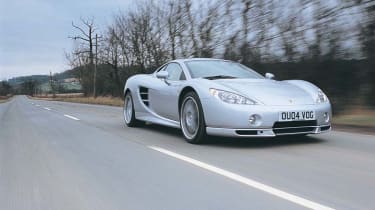 Things have moved on since I last visited the Ascari factory. Two years ago the frontage was still under construction and the car was still in development. Now there's a cool marbled reception area behind smoked glass doors and deliveries of the KZ1 will begin in just a few weeks. On the wall of sales manager Chris Burton's office is a board listing KZ1 orders. The first is destined for Revo250, the new private membership supercar/superyacht club, the second is Ascari's demo and then there are three other names. It's Burton's job to ensure there are, eventually, 50 names on the board, accounting for the total KZ1 production run.

He's got his work cut out. Exclusivity is part of the appeal, certainly, much as it is with the Bristol Fighter. But Ferrari and Lamborghini make standard-setting supercars against which to judge the KZ1 - and the Ascari will cost no less than £235K. For now, though, we'll put aside value judgements and concentrate on whether the Ascari makes a compelling dynamic case for itself.

To recap the specification, the KZ1 has a carbonfibre tub and body, a 500bhp version of the old BMW M5's 5-litre V8, dry-sumped and mid-mounted, a CIMA six-speed manual gearbox, double wishbone suspension and AP Racing brakes with anti-lock. It weighs 1300kg and claimed performance is zero to 60mph in less than 4sec and a top speed of 200mph.

Three times we've been invited to drive the KZ1: Peter Tomalin was impressed by Prototype 3 in early 2003, Harry Metcalfe was less convinced by Prototype 7 in early 2004, and now it's my turn to try the production-ready car. Well, virtually. This left-hooker is the personal car of Klaas Zwart, owner and architect of Ascari Cars, and it's the final spec in all but a couple of details. Customer cars will have a fatter-rimmed steering wheel and benefit from a minor change to the gearshift's cross-gate springing.

It's a compact, pretty car, especially from the rear three-quarters, with a delicacy and stance not unlike that of a Ferrari 360. It takes a little physical suppleness to ease yourself into the driver's seat but it's worth it, the deeply bolstered, carbon-shelled bucket folding itself around you with a reassuring embrace. The signed-off cockpit is a refinement of that of Prototype 7, and is superbly well finished, with tidily executed leather coating all surfaces that aren't finished in Alcantara. Glance inside the door-shut and the finish is immaculate. This is a quality product.

The simply styled facia features Audi TT-style air vents and lots of bespoke aluminium fittings. 'We didn't want people trying to spot where the switchgear came from,' says Burton. Just then I spot that the starter button looks just like that of the VX220 and is positioned in the same spot above the centre console. Dead ahead are the small speedo and rev counter, in the centre a trio of auxiliary gauges, all featuring fish-eye-like lenses and small, yellow-on-black markings.

The wheel adjusts for both rake and reach, the aluminium pedals are floor-hinged, racecar-style, and the seat, wheel and pedals are comfortably aligned. That said, there's no left footrest in this left-hand-drive car due to wheelarch intrusion and, once I've pulled the seat forward to suit my 5ft 8in frame, my knees are close to the underside of the dash.

I press the starter button and the sound that erupts isn't quite what I anticipated. In the M5 the V8 is quite subdued but the heavy beat gets through, while in the KZ1 it sounds like the bass has been turned down a fraction and the treble turned up. The sound's not unappealing, rather like a seriously tuned racing V8 such as that fitted to the Corvette Le Mans racer. Ascari's work to raise its output leaves the internals untouched and concentrates on breathing, with revised variable valve timing and bespoke intake manifolds and fuel and ignition mapping. Claimed outputs are 500bhp at 7000rpm and 368lb ft of torque at 4500rpm. For reference, in the M5 the V8 gave 400bhp at 6600rpm and the same torque at 3800.

Finding decent roads means negotiating Banbury town centre, and I'm glad to report that since we last drove the KZ1 the weighting and action of both the throttle and the twin-plate clutch have been polished. There's no stickiness to the throttle and the clutch engages smoothly and progressively, while the gearshift has a satisfyingly positive, mechanical action.

What's apparent early on is that there's a very stiff structure beneath the KZ1. The suspension is firmly set-up and rides low speed bumps with some resilience but the car feels solidly constructed. Carbon structures can sound hollow over nastily broken asphalt and the Ascari is no different to most. Oddly, around town there's also a dominant drivetrain zizz on a light throttle that swamps the woofle of the V8 when it should be at its most engaging and TVR-like.

Out on open roads there's an appealing, all-of-a-piece feel to the KZ1. The steering is quick but not nervously so, the mass of the car feels centred around you and through fast sweepers it stays flat and roll-free. Step on the throttle and the KZ1 lunges forward keenly, the V8 really getting into its stride as the tacho needle reaches 3000rpm, thumping the car forward on a growing wave of urge. The engine finds its true voice here too, filling the cockpit with a marvellously evocative, tight-lipped howl that again brings to mind racing V8s with high specific outputs.

That initial resilience to the ride remains at speed and when the edge of the road surface is choppy the steering wheel jiggles noticeably, though the car seems less distracted than the wheel. Push deep into inviting third-gear corners and the chassis starts to work more obviously, delivering more feel, and you find strong grip from the Pirelli P-Zero Rossos. It's almost like you've got to break a pre-load on the dampers to get the chassis working. We found some excellent, undulating, twisting roads where the KZ1 demonstrated poise and balance.

The further you drive the KZ1, the more you come to appreciate its ability. It makes speed deceptively easy and it's only when you execute a few overtakes that you fully appreciate just how rapidly it responds and how fast it piles on the speed. Traction and grip feel strong on these dry roads, so it's a surprise to peel into tighter corners and feel the nose pushing wide in safe understeer. This is the basic set-up that KZ1s will come with, though the suspension is adjustable and Ascari can tune the car to your taste. I'd like a slightly softer set-up to feel more involved in the cornering process, and a tad more front-end grip. Also, although there's no doubting the effectiveness of the AP brakes, for me the KZ1's pedal was a little under-servoed, requiring a fraction more pressure than I'd prefer.

You've also got to keep the throttle pinned to the floor and venture beyond the V8's gloriously thundering mid-range, between 3000 and 5500rpm, if you want the full-on supercar experience. What dissuades you from hanging around at 6000rpm or so, waiting for the opportunity to exploit the final, breathtaking 1500rpm, is the rather intrusive, whiney tone that the V8 produces. Ignore that, seize the opportunity of a decent straight and the KZ1 steps up a gear. The chassis feels even better, smoothing out the road surface and taking deep compressions in its stride, while the acceleration nudges the crazy zone.

So how does the Ascari stack up? It's deceptively fast, and I'm sure the claimed 0-60mph time and circa 200mph maximum aren't far off, though somehow I'd expected the performance to feel more generous and readily exploitable, given the combination of a torquey, potent V8 and low kerb weight.

Dynamically the KZ1 doesn't remind me strongly of any other supercar. There are hints of Esprit Sport 350 in its clean, crisp steering and tightly controlled roll and pitch, and as Lotus engineers have been involved with the car's development this shouldn't be a surprise. I feel, however, that the firmness of the set-up is hiding the true character of the chassis and that a little more initial suppleness would make it a more engaging drive.

There's no faulting the fit, finish and integrity; it inspires confidence in the parts that you can't see. This car is very professionally executed.

It is very expensive, though. Since work started on the KZ1, Lamborghini has introduced the 500bhp V10 Gallardo and Ferrari its F430 with its astonishing 493bhp, 8500rpm V8. Both cost a cool £100K less. Even if the all-carbon KZ1 cost the same, it'd be difficult to justify in purely objective terms.

Which leaves the Ascari's ace: exclusivity. How much value potential buyers attach to that will determine whether the KZ1 sells or not.