It's a sort of Cobra replica with a twist. It's also a real blast 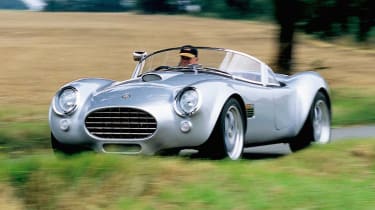 It's a brave man who tinkers with an icon. Whatever the dynamic attributes and shortcomings of the Cobra and its many replicas, most people are agreed that it looks pretty bloody marvellous. You might feel an urge to make Tracey Emin's bed for her, but you wouldn't want to add a thong to Michelangelo's David.

Enter Mike Milne-Home, founder of Woking-based design house Studio G. Milne-Home has taken the Cobra, or rather, one of the better Cobra replicas, and added some stylistic tweaks of his own, some of them functional, some purely aesthetic. Where the Cobra has a flat, rather upright windscreen, the G350 has a low, curving screen reminiscent of a 1950s Porsche Speedster. And where the Cobra has protuberant headlights, the G350's are laid-back under perspex farings. Then there's the distinctive bonnet scoop and the egg-crate grille, inspired by 1950s Ferrari racers.

Milne-Home has tidied up the snake's tail, too, and brought order to the dash where before the instruments and switchgear appeared to have been fired into place with a sawn-off shotgun. It's typical of his attention to detail that he's designed new faces for the dials, while the leather for the bucket seats is a particularly soft hide usually used for fine furniture. It's all very tastefully done and the quality of finish is first-rate. If you had to guess without touching you'd say the bodywork was aluminium but it is in fact glassfibre.

It's what lies beneath that makes the G350 a cut above most fake snakes, for the G350 is a reskinned version of Leicestershire-based Gardner Douglas's long-running GD427, a very fine thing indeed. The starting point is a tubular steel backbone that's much stiffer than the Cobra's old ladder-type chassis and is an excellent platform for the bespoke double-wishbone suspension front and rear. Coil springs over adjustable dampers, ventilated discs all round and 17in alloys with 225/45 fronts and 255/45 rear tyres complete the rolling chassis.

Gardner Douglas wisely takes its engines from GM. This car has the LS2 6-litre V8 in out-of-the-crate 350bhp tune, mated to a conventional Tremec five-speed manual gearbox and limited-slip diff. You can specify higher states of tune, over 500bhp is attainable, though I'd advise you to drive the demo car first. One thing it's not short of is grunt...

The cockpit's a snug fit, the view over the rolling bonnet and wings sensational. The driving position's not as cramped and tricky as in the real thing, where you're forced to splay your legs around the wheel, but there's not a great deal of right elbow room; ergonomically this is still a car from another era.

The performance, however, is anything but. The 6-litre V8 has just 980kg to shift, and shift it most certainly does. Unlike old-school carb-fed V8s, this one's polite and tractable when you need it to be, but floor the throttle in any of the first three gears and the G350 accelerates ferociously, while Gardner Douglas's twin low-slung exhausts provide a suitably savage bark to match its bite.

Short straights are wolfed down hungrily; on longer stretches it's the bombardment of air streaming around the low-cut windscreen that eventually forces you to back off, though by this stage you're likely to be into three figures, so it's probably just as well.

The Tremec 'box has a pleasingly mechanical action and the clutch has a progressive take-up; not so impressive on this car was the middle pedal; there was a bit too much squidge in it, which ruled out heel and toe downchanges. Gardner Douglas's Andy Burrows acknowledged it wasn't quite right but reckoned it could be easily fixed.

At least as impressive as the performance is the chassis. It doesn't rewrite the dynamic rulebook, it just does everything you'd hope it would extremely well. It rides well, it grips phenomenally well, and unless you go out of your way to provoke it, there don't appear to be any unpleasant surprises lying in wait to catch you out.

Whether you choose to provoke it is the big question. The unassisted steering (PAS is an option) is fairly low-geared and requires quite a bit of hefting around in slower turns. It could also do with a touch more self-centring. And when you suddenly have to pile on a lot of lock, the restricted arm-room can be an issue. I reckon that, on the road at least, most G350/GD427 owners will prefer to keep it tidy, slow in and fast out, drawing on the huge traction out of corners and savouring that ferocious thrust along the straights, over and over again.

As a weekend toy and for the occasional foray onto the continent, the G350 has undeniable appeal. With prices starting at around £55,000 depending on spec, it ain't cheap, but Mike Milne-Home only plans to sell 50 examples. The Gardner Douglas underpinnings are well-proven and the Studio G twists to the formula are nicely judged and well executed. Whether it's aesthetically more appealing than a conventional GD427 is of course entirely in the eye of the beholder. This beholder would be happy with either of them.