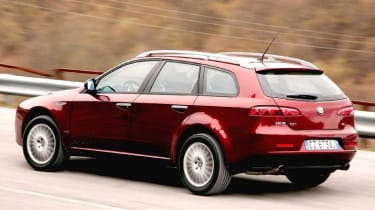 Estates (and let's please use the word 'estate', not 'Touring' or 'Avant' or, as Alfa would have it, 'Sportwagon') are cool. Saloons always have a whiff of rep about them, whereas an estate suggests some sort of life that requires more space for moving interesting stuff. They also generally look good, and the new Alfa 159 estate has to be one of the best looking of the lot. The front headlights, which it shares with the saloon, are deliciously sculptural, while the rear bodywork flows around the extra space without ever looking like function was allowed to get in the way of form. Inside, the design delights continue with beautifully stitched seats and a dashboard that's so driver-focused that it seems to be giving the front passenger a cold shoulder. Of course, if the estate is generically cooler than the saloon, then the fast estate has to be the coolest of all mainstream cars (remember the early '90s BTCC Volvos?), so consequently I've jumped into the headlining 159 Sportwagon, with a 256bhp 3.2-litre JTS V6 and Alfa's Q4 four-wheel-drive system. The V6's sound is instantly up there with the best - deep, complex and characterful. In terms of performance, however, it doesn't quite live up to its vocal billing, the six cylinders seeming unwilling to rev with any sort of vim or vigour. The gearchange doesn't like to be rushed either, preferring changes to be performed in two movements, a brief hiatus coming just before you engage the next gear. Although there are few things more impressive than bulk at speed (think Jonah Lomu), the Q4, which tips the scales at 1730kg, could certainly do with losing the odd kilo or two. You particularly notice the weight when entering a corner because, despite a reasonably taut primary ride, there's quite a lot of roll. The 159 pitches forward on the brakes, too, which have a fairly tough time reigning-in all that mass. Once into the corners, however, the Q4 is very enjoyable. There's a healthy rear-bias to the Q4 set-up (43:57 front:rear), and although you won't be swinging the Labrador out by miles on the exit of every corner, there is a lovely, neutral balance, with the back end an ever-present part of proceedings. Hardly an ounce of power is ever lost to wheelspin either, although that does make you think it could cope with a bit more. All in all, the 159 Sportwagon may finish second to a 330i Touring in dynamic terms, but not by a gaping margin, and it's a much more attractive way to transport lots of interesting stuff.