There was always an air of slight surreality surrounding the MG SV-R, and now that it's gone we almost have to pinch ourselves to believe it was ever here - or even that it existed at all. But exist it did, and we have the pictures to prove it. 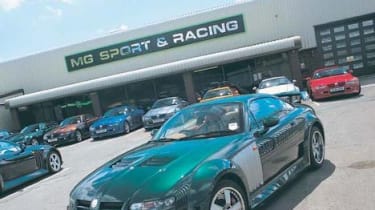 There was always an air of slight surreality surrounding the MG SV-R, and now that it's gone we almost have to pinch ourselves to believe it was ever here - or even that it existed at all. But exist it did, and we have the pictures to prove it.

The first ones show Rowan Atkinson taking custody of BX54 BBV, resplendent in pearlescent British Racing Green with tan leather (the car, that is, not the comedic actor). This was at the MG Sport & Racing facility in Longbridge, just down the road from the eponymous car factory. I went along too; I was as intrigued as Mr A to learn more about this £83,000 MG and the operation behind it.

It was early January, and though the good ship MG Rover had long been a stranger to smooth waters, there was as yet no hint of the turmoil ahead. Sport & Racing always lived a satellite existence to the main company, and the management were impressively bullish as they explained how it made perfect sense for the SVs, with their Italian steel backbones, British carbonfibre bodies and American Ford V8s to be partially constructed in Italy before being shipped over for final assembly in Birmingham. The small, well-presented factory unit was impressive, too. You couldn't help but wish them well, even if it all seemed faintly barmy.

Rowan was genuinely fascinated by this curious mongrel. As Sport & Racing had correctly surmised when they offered him the car for a six-month trial, he was a snug fit with the target customer profile: a genuine car enthusiast with a few bob in the bank and who, crucially, wasn't interested in the too-obvious Porsche alternative.

As a fan of pre-Ford Astons, he was also attracted by the idea of a largely hand-built and bespoke British coupe with a big-capacity front-mounted V8, rear-wheel drive and the promise of lots of what we call, for want of a better word, character. He had no great beef with the £82,950 price tag (£87,700 for this one with its paint and trim options) - just as long as the car delivered something as unique and as thrilling as its looks suggested it should.

There were early niggles. Wind noise around the passenger door window, a rattle from somewhere up front. But the SV-R was going well, and Rowan warming to it, until one cold morning it stalled during low-speed manoeuvring, restarted but stalled again, and then would not restart at all. MG dealer Phoenix Hatfield came out promptly with a replacement SV-R and the car was returned a few days later in rude health, except that the whistles and rattle remained. Back it went. The wind noise was traced to a faulty micro switch controlling the passenger window, the rattle to a heat shield near the gearbox.

On longer journeys, the MG proved a fine GT, the Recaros comfortable as well as supportive, the chassis taut without riding harshly. Rowan also found the traction control to be surprisingly laissez-faire. Then, returning from filming in Cornwall, an odd graunching noise could be heard when accelerating out of a left-hand corner. Back to Hatfield, where it was discovered that a heat shield was rubbing on the steering column.

At this stage Rowan - well-used to the role of unpaid development driver from his experience of 1980s Astons - was still prepared to indulge the SV-R. But for how much longer? The following month it was billeted on the Isle of Man where he was filming. At one point it was left for a week and, when he went to start it, the battery was dead, trickle-drained, presumably by the alarm. Getting to the battery, he discovered after phoning the factory, involved removing the offside front wheel...

A lap of the TT circuit restored his enthusiasm, but it was dented again by a clonking noise from somewhere beneath the rear floorpan over sharp bumps. Nothing seemed amiss with the ride or handling, but we wanted to get it checked. It was early April, and the dealers we spoke to were suddenly but unsurprisingly reluctant to look at it. MG Rover had gone into administration, and they didn't know whether they'd be paid for any work.

Four and a half months into the loan, an email arrived from Mr A, asking whether any other members of the editorial team fancied running the MG for a while. I got the feeling it wasn't just the clonks. The 5-litre V8 always felt 'sat on', he said, and extracting the performance was made even harder work by the long-travel clutch and slow, uncooperative gearchange.

And so I travelled to Oxfordshire to collect poor Orphan Annie. A disenchanted Rowan pointed out the mounting bracket for the bonnet hinge: black-painted steel that was already rusting. And the window seals weren't sealing properly. And the paint was flaking off the 'gills'. Things that might be just about acceptable in a £40,000 TVR...

And yet there was definitely something about the SV-R. The engine sounded purposeful when you fired it up and had plenty of torque. I enjoyed several inspirational drives, as did other members of the team. The steering was beautifully weighted, accurate and well-endowed with feel. The brakes were superb, with a wonderfully confidence-inspiring pedal feel, and the suspension was generally supple and well controlled. It was always a tactile, involving drive. Indeed, the tail could get away from you quite quickly in damp conditions, slithering out of roundabouts even with TC on. But handling and braking were the car's strongest suits.

In two weeks I had become quite attached to the MG. Like Rowan and most observers, I liked the way it looked, though the rear spoiler split opinion (it also hid following cars, including ones with blue lights). And then the call from the administrators, asking for the car back a month early.

The last pictures we took were of BX54 BBV parked back outside Sport & Racing, whose fate is still by no means certain as I write. The small factory unit was by now a servicing centre and parking bay for unsold SVs and SV-Rs, with prices from £45K, which is a tad more realistic.

It would be a shame if this is the end of the SV-R story. Rowan was always struck by the great depth of enthusiasm for the MG marque: 'I have twice raced my Aston at meetings organised by the MG Car Club and the grids have been huge. And there is comparable enthusiasm among the very young. I'll never forget when driving the SV-R, being spotted by a spotty 17-year-old who, at the sight of the car, promptly leapt into the air with his arms and legs splayed. An Enzo would not have curried a more favourable response. If ever there was a brand with a future...'

There was much to like about the SV-R. We often criticise cars for being bland and boring - two things the MG never was. But would a new owner of Sport & Racing be able to make a go of it? The SV-R remains hamstrung by the high cost of building it, and the suspicion it never enjoyed the critical last five per cent of development.

It's that last five that costs a disproportionate amount of time and money. You can feel it seeping from every pore of a Porsche. But never mind a 911 - for the price of the SV-R you could have the car on this month's cover. An Aston for the price of an MG. Something's not right here...