Porsche, Ferrari, Aston Martin, Alfa Romeo and Audi are among the carmakers battling to win evo Car of the Year 2013, in association with Michelin 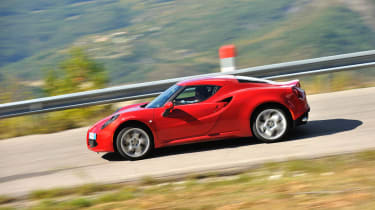 evo Car of the Year contests are always tightly fought affairs, but 2013 has proved a particular vintage year for performance cars. Jaguar’s most exciting sports car yet has arrived, a svelte Alfa Romeo concept has become reality and a Ferrari coupe with Formula 1 power levels has landed in the UK. And that’s before we’ve mentioned the return of the initials G, T and 3…

You can read the full eCoty 2013 test in evo issue 190 – in shops now – or on our new tablet and smartphone app. For now, whet your appetite with a look at all the cars in contention – the Alfa Romeo 4C, Aston Martin V12 Vantage S, Audi R8 V10 Plus, Ferrari F12 Berlinetta, Ford Fiesta ST Mountune, Jaguar F-type V8S, Lotus Exige S Roadster, Mercedes SLS AMG Black Series, Mini John Cooper Works GP, Porsche 911 GT3 and the second-generation Porsche Cayman S – and the glorious South of France roads where the very best will fight it out to be crowned this year’s greatest performance car.